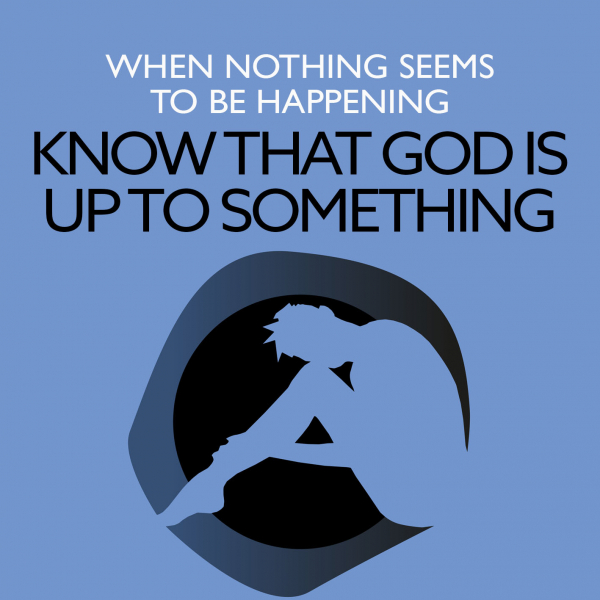 There are times in life when everything appears to be at a standstill. We have all experienced this during the pandemic. During such times, nothing seems to happen. Everything appears frozen. All doors get slammed shut, and no new doors seem to be opening. Things that once were exciting now seem tedious and boring. It feels like we are treading water, or jumping in one place. We are tempted to do something crazy just to make something happen. But nothing changes. We start to feel frustrated and frightened. So, what are we to do?

Relax! Know that God is still at work. Just because we don’t see something happening, it doesn’t mean it isn’t. Let me explain by telling you a parable.

A man had a plot of land that he wanted to grow crops in. Unfortunately, a huge rock sat right in the center of the property. The man couldn’t afford to have professionals movers move the stone, but he had read somewhere that faith could move mountains. So, being a man of faith, he prayed.

A week later, an angel suddenly appeared. “Push the rock for 60 minutes daily for a month,” the angel said. “I’ll be back after the month is over.”

Delighted his prayers were answered, the man woke up early the following day and spent an hour pushing the rock. He did this for a month, but the stone had not budged an inch by the end of it. When the angel reappeared, as he had promised, the farmer exclaimed, “You told me to push that rock, but I haven’t moved it a bit!”

“I never said you could move the rock,” the angel said.

“Then why?” the farmer asked, bewildered.

“Take off your shirt and look at yourself in the mirror,” the angel replied. When the man looked at himself, he saw his body had become toned, strong, and muscular, ready for the strenuous work of growing crops that he was going to plant.

The angel smiled. “I’ll take care of that rock now,” he said as he left.

God wants to grow us, to prepare us for the greater things he has in store for us. The wilderness is one of the places he does this. When life comes to a standstill, we have an opportunity to deepen our relationship with God, to increase our understanding of his ways, to learn new lessons and gain fresh insights about the truth, to grow stronger in our faith, to correct wrongs. So, when life starts moving again—and move it most certainly will—we will be better equipped to deal with the new challenges that come our way.

Enjoy your special time with him while it lasts!