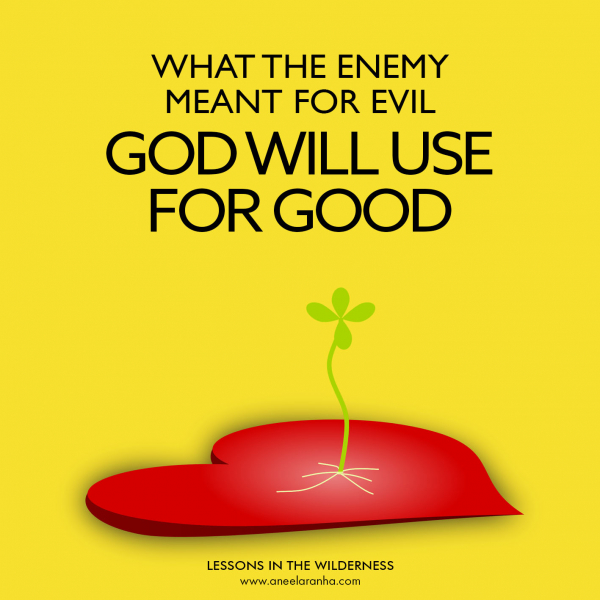 Life is full of disappointments and setbacks. Some of these are of our own making, but many are not. When we are unfairly laid off at work, when a lover walks out of a relationship without reason, when we are cheated in a business deal, when we are betrayed by someone we trusted, we are often left broken and miserable. We can become angry and bitter, resentful and hating, but this serves no purpose. It only corrupts our soul. It is far better to fix our eyes on God and trust in him. He is not unmindful of what has happened, and he will ensure he renders justice.

Remember Joseph, he of technicolored coat fame? He was sold into slavery—by his brothers, no less! They were jealous of him and wanted to be rid of him. When they sold Joseph, they thought they had seen the last of him. But, they hadn’t reckoned on God’s plans for the man.

Despite numerous setbacks, including time spent in a prison cell, Joseph eventually ended up sitting at the right hand of Pharoah, the ruler of Egypt. His brothers, who sold him—they had wanted to kill him first!—found themselves at his mercy. However, being the man of God that he was, Joseph was merciful, not vindictive. “You intended to harm me, but God intended it for good,” he told his terrified brothers as he forgave them (Genesis 50:20).

God may not have those who hurt us grovel at our feet (although don’t put that past him!) but let us not wish for that to happen. However, God will give us back what was taken from us in greater quantity! We have a generous God, and his measures become more generous when he gives us back what we lost.

As a case in point, look at Job. Immensely blessed by God, to begin with, he ended up losing everything he had. But his philosophy was sound. “Naked I came from my mother’s womb, and naked I will depart,” he declared. “The LORD gave and the LORD has taken away; may the name of the LORD be praised” (Job 1:21). Job believed nothing belonged to him; it was all God’s, including the people in his life, so God was free to do as he wished with them.

But do you know how his story ends? The LORD restored his fortunes and gave him twice as much as he had before. All his brothers and sisters and everyone who had known him before came and ate with him in his house. The LORD blessed the latter part of Job’s life more than the former part (Job 42:10-12).

So, don’t be discouraged when the enemy takes away something from you. You will get a better job, a better partner, a better business, everything twice as good as what you had before!