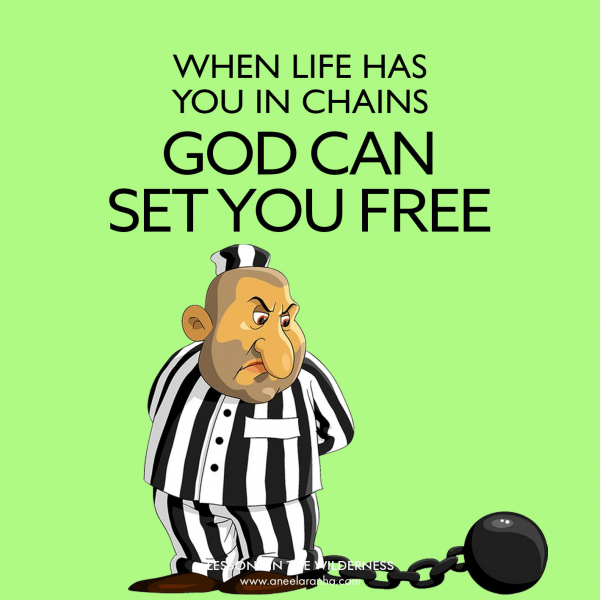 “It is for freedom that Christ has set us free,” Paul declared in his letter to the Galatians (5:1), but most of us don’t live a free life. We may not be alcoholics or drug addicts, but other addictions are equally harmful, if not worse. We gossip at every opportunity, slander people without thinking of the damage it causes, engage in petty politics, or participate in other “socially acceptable” evils. If we think about it seriously, we’d realize that we are as enslaved to these habits as an alcoholic is to his bottle or a junkie to his needle.

But these are not the only things that enslave us. Depression, loneliness, a sense of poor self-esteem, fear, oppressive thoughts, and many other things also do not allow us to lead a life of freedom. How do we break free of the chains? The solution is surprisingly easy. Praise God! I know this may sound weird, so let me tell you a story. You’ll find this in Acts 16:16-40

The apostles’ Paul and Silas found themselves in prison one day for no fault of their own. They were beaten with rods and then tossed into an inner cell with their feet fastened in stocks. To the amazement of all the other prisoners, who were undoubtedly in varying states of misery, the two men started praising God! “Suddenly there was such a violent earthquake that the foundations of the prison were shaken. At once all the prison doors flew open, and everyone’s chains came loose” (Acts 16:26). Not only were the apostles free, but the other prisoners were also free

We find several examples of the power of praise in Scripture. One example is King Jehoshaphat’s victory against the combined armies of the Moabites, Ammonites, and Meunites who had invaded Judah. “As they began to sing and praise, the LORD set ambushes against the men of Ammon and Moab and Mount Seir who were invading Judah, and they were defeated” (2 Chronicles 20:22). Another example is when the walls of Jericho came down after the Israelites marched around the city, blowing trumpets and praising God (see Joshua 6:1-7).

How does this work? It is simple. When we praise God, especially when faced with challenging situations, we acknowledge that our God is great and mighty and can help us overcome those challenges. And God moves in response to that praise. Chains are broken. Battles are won. Strongholds come down.

So, dear friend, try praising God the next time you feel overwhelmed by life, oppressed by negative emotions, or struggling with addictions. Say Halleluia loudly and often, sing songs glorifying God, and see how easily those chains break! Walk free!