God Has Your Back 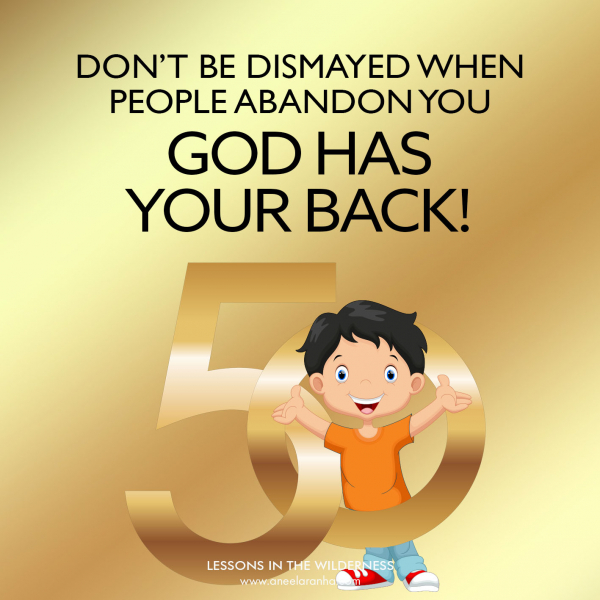 Yes, I know it hurts. When people close to us turn their backs on us, especially during our moments of greatest need, there are no words to describe the heartache. But God teaches us one of the most important lessons of our lives through this, and the lesson is this: Don’t depend on people; depend on God.

We tend to rely on people and believe there is strength in numbers, but most people are undependable, and numbers don’t mean anything. This is not because people are bad; they just have their self-interests at heart. When these interests are threatened, many will leave us to the wolves. Look at what the apostles did at Gethsemane. They all loved Jesus but ran for their lives when soldiers came to arrest him (see Mark 14:50). Jesus was undoubtedly saddened, but he knew he had to face his final challenge alone. He also knew that it was part of God’s plan and he wasn’t *really* alone (see John 16:32)

We, too, will face challenges, and we will have to face many of them on our own. It is how we become strong. However, there will be some battles where we will need the support of others, but even here, our faith has to rest in God and not in people. Let me tell you a story.

There once lived a man named Gideon, who God chose as one of his Judges. (You’ll find his story in Judges 6-8.) One day, Gideon found himself facing a massive army of the Midianites. Although Gideon managed to put together about 30,000 men, they were still outnumbered by the enemy. However, God told Gideon he had too many men! He was to tell those who were afraid to leave. Twenty thousand left! But God told Gideon he still had too many with him. He got Gideon to cull them down to 300! Gideon went to war with 300 men and won!

The point of this story should be obvious. God doesn’t play the numbers game like we seem to do. Consider Jesus. Hundreds of people followed him, walking along with him and his twelve apostles as he traveled from town to town. One day he said something they didn’t like, and they walked away, en masse! (see John 6:66). Just like that! Once again, I am sure Jesus was saddened—more at their inability to understand them than their abandonment— but he knew that twelve men were all he needed to fulfill his mission. Even the betrayer had his part to play.

So, dear friend, don’t be dismayed if the people you love leave you. It is all in God’s plan. And don’t feel alone because you are not. God is with you, and he will never abandon you, no matter who else does. God is a *real* friend. And when you need others, he will give you the right people at the right time. They may not be many, but they will be enough to lead you to victory. God bless you.