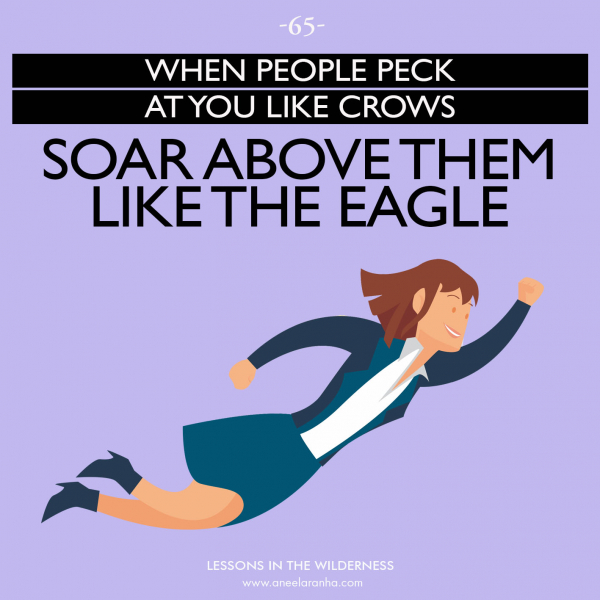 Have you noticed how people are fine as long as we are on the same level as them, but the moment we move up the ladder, their attitude changes? Instead of improving themselves and rising along with us, they will try to take us down instead. They will resort to back-biting, slander, and numerous other things to halt our progress or ruin our success, pecking at us like crows.

We have all experienced this, not just in the corporate world but in so many different walks of life. We can be tempted to hit back, believing it is only right to defend ourselves. But if we give this some serious thought, what do we really accomplish by arguing or fighting? We might have the satisfaction of getting a few punches in but think of the waste of time and energy wasted. This is time and energy we could use for better purposes, like fulfilling our destiny!

The biblical patriarch Isaac offers a great example of this. When Isaac tried to settle in the Valley of Gerar, he began digging up some of the wells built by his father, Abraham. The local herders started quarreling with him, saying the water was theirs. He didn’t bother arguing with them, although the wells rightfully belonged to him. He simply moved away and dug another.

The herdsmen quarreled with him about this well too. Again he moved away wordlessly. They might have thought him cowardly, but it didn’t bother Isaac what anyone thought of him. He simply knew that he could use the time spent in arguing digging more wells! The third time he dug a well, no one quarreled over it. The herders saw that this was not a man daunted by anything they threw at him and grudgingly gave him their respect.

Isaac called the well ‘Reheboth,’ meaning ‘open spaces.’ (see Genesis 26:19-22). It was Isaac’s way of acknowledging that God had given him ample room, and he and his shepherds could now be fruitful without people interfering with him anymore.

This is how God will reward us if we do not retaliate when people pech at us. God is not blind to the things that people do to us. But when we retaliate, we lose the favor we have with him. When we take the higher ground, we gain favor, both in his eyes and, eventually, in the eyes of those around us. We will have all the space we need to grow!

So, dear friend, when people peck at you like crows, rise above the situation and soar high like the eagle toward your destiny!