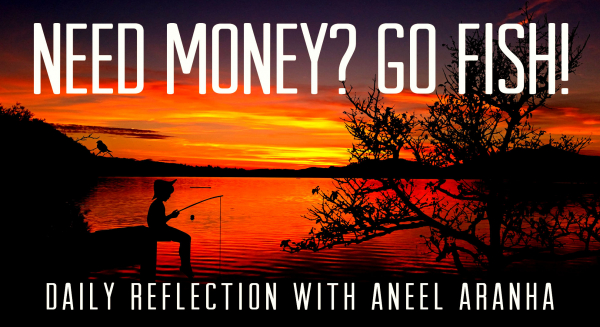 As they were gathering in Galilee, Jesus said to them, “The Son of Man is going to be betrayed into human hands, and they will kill him, and on the third day he will be raised.” And they were greatly distressed. When they reached Capernaum, the collectors of the temple tax came to Peter and said, “Does your teacher not pay the temple tax?” He said, “Yes, he does.” And when he came home, Jesus spoke of it first, asking, “What do you think, Simon? From whom do kings of the earth take toll or tribute? From their children or from others?” When Peter said, “From others,” Jesus said to him, “Then the children are free. However, so that we do not give offense to them, go to the sea and cast a hook; take the first fish that comes up; and when you open its mouth, you will find a coin; take that and give it to them for you and me.”

As I was doing this, I heard that voice go again: “Aneel, I told you to be still. Why couldn’t you trust me?”  I felt highly embarrassed. “Next time, Lord,” I said. “I’ll be still next time.” And I’m hoping there won’t be a next time, but three months later it is the same story. A check is due and there aren’t enough funds. There are seven days left for funds to be deposited. When I go to my prayer room, I hear the same thing. “I’ll take care of it. Be still.” I was still, this time for three days, but then my nerve broke and I went to a friend and borrowed money again.

And again I heard this voice gently rebuking me. “Aneel, I told you to be still. When will you learn to trust me?” This time I felt ashamed. I had gotten to know God so well, it was really shameful that I didn’t trust him. “Okay, Lord,” I said, “I’ll be still.” But this time I mean it. I figured if they tossed me in jail, I’d evangelise the prisoners, but I wasn’t going to borrow anything from anyone. I was hoping, of course, it wouldn’t come to that, but when God wants to test you, he tests you. Three months later, it is the same story. Check due. Not enough funds. And the countdown begins. 7 days. 6. 5. 4. 3. 2. 1.  0. Nothing. I remain still.