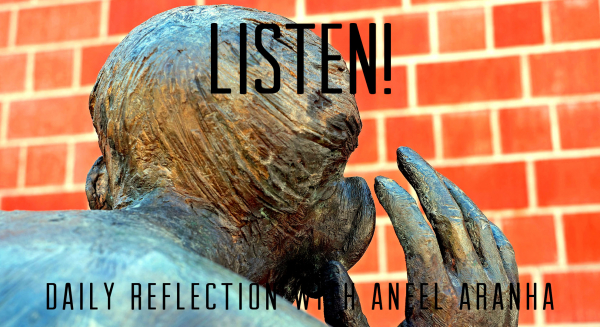 Six days later, Jesus took with him Peter and James and John, and led them up a high mountain apart, by themselves. And he was transfigured before them, and his clothes became dazzling white, such as no one on earth could bleach them. And there appeared to them Elijah with Moses, who were talking with Jesus. Then Peter said to Jesus, “Rabbi, it is good for us to be here; let us make three dwellings, one for you, one for Moses, and one for Elijah.” He did not know what to say, for they were terrified. Then a cloud overshadowed them, and from the cloud there came a voice, “This is my Son, the Beloved; listen to him!” Suddenly when they looked around, they saw no one with them any more, but only Jesus. As they were coming down the mountain, he ordered them to tell no one about what they had seen, until after the Son of Man had risen from the dead. So they kept the matter to themselves, questioning what this rising from the dead could mean.

A few people have remarked about how, when I start reading the gospel for the day, I often begin by saying: Listen. It was something I did without thinking, simply inviting those watching the reflections to pay closer attention to the gospel. However, when I was reflecting on today’s passage, I realized that listening was something that was very important. The voice from the cloud said: This is my Son, the Beloved; listen to him.” And Jesus, himself, had at one point advised: “Consider carefully how you listen” (Luke 8:18).

Most of us are very poor listeners. But with a little practice we can become good listeners and this is vital because there is no way that we are going to be able to listen to God if we can’t listen to people. Here are a few quick pointers. Don’t listen with half a ear. Pay full attention to what the person is saying and don’t try to second guess what he is going to say next, or your own response to him. Try to keep peripheral distractions out of the way. They constantly bombard you vying for attention.

Remember that good listening is an act of love. Keep this specially in mind the next time your spouse or your children or your parents try to talk to you. It will make a huge difference to your relationship with them. Try it and see. Good listening is also an act of ministry. When a person sees that you are actually listening to what he or she is saying seriously, he is tremendously comforted. This is even more so if you keep affirming the person instead of telling him (or her) what to do.

Good listening also helps in good speaking. I remember the first year after my conversion the Holy Spirit told me not to open my mouth; just to listen to what people said. And I would listen, even to people who sometimes sounded like total idiots. The result was at the end of the year I had so much of information, which he then helped to filter into real manna. It taught me an important principle. When you listen to what others have to say you might learn something that is new; when you talk, you are just repeating what you already know.

If you were “listening”, you would know.