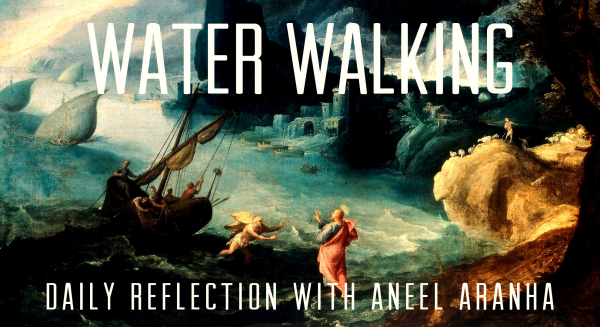 Immediately he made the disciples get into the boat and go on ahead to the other side, while he dismissed the crowds. And after he had dismissed the crowds, he went up the mountain by himself to pray. When evening came, he was there alone, but by this time the boat, battered by the waves, was far from the land, for the wind was against them. And early in the morning he came walking toward them on the sea. But when the disciples saw him walking on the sea, they were terrified, saying, “It is a ghost!” And they cried out in fear. But immediately Jesus spoke to them and said, “Take heart, it is I; do not be afraid.” Peter answered him, “Lord, if it is you, command me to come to you on the water.” He said, “Come.” So Peter got out of the boat, started walking on the water, and came toward Jesus. But when he noticed the strong wind, he became frightened, and beginning to sink, he cried out, “Lord, save me!” Jesus immediately reached out his hand and caught him, saying to him, “You of little faith, why did you doubt?” When they got into the boat, the wind ceased. And those in the boat worshiped him, saying, “Truly you are the Son of God.” When they had crossed over, they came to land at Gennesaret. After the people of that place recognized him, they sent word throughout the region and brought all who were sick to him, and begged him that they might touch even the fringe of his cloak; and all who touched it were healed.

This is an incredible story that I speak about in nearly every retreat that I conduct. Not only is it very dramatic it has so many lessons to teach us, especially about faith. Let us learn a very simple one for today. Let’s look at this story through the eyes of Peter. Peter, as you probably know, is an headstrong and impetuous fisherman. He has the misfortune of getting caught in a storm almost as often as he is in a boat.

In this story, he is in one of these storms. The wind is blowing fiercely, the waters are churning, the boat he is in is rocking dangerously from side to side - and Peter finds himself very afraid. Then, in the middle of the storm - and also in the middle of the night because it’s about 4 am when the events described here take place - he sees a figure coming towards him walking on the water.

Already afraid, now he are terrified because it can only be a ghost. Then the “ghost” who actually happens to be Jesus says, “Hey, chill; it’s only me. Jesus.” I don’t know about you, but I’d be even more afraid. What this guy doing walking on water?! But Peter, even though he was scared witness, was an impetuous man - I think we have mentioned that already - whose mouth worked faster than his brain and without thinking he said, “Jesus, that’s a neat trick, I wanna do it too.” And Jesus replies, “Come on in. The water’s good.”

And Peter steps out of the boat and begins to walk on water. I just want you to think about this incredible impossible thing that Peter is doing: walking on water. He takes a few steps, undoubtedly feeling an adnenalin rush that only somebody engaged in high adventure can feel, before he loses his nerve. Scripture says that “when he noticed the strong wind, he became frightened, and beginning to sink, he cried out, “Lord, save me!”

Here’s the question for you. Where was the wind all this time? It was still blowing. The waters were still churning. The boat was still rocking. How was Peter able to walk on the water then? Because he had his eyes fixed on Jesus. The moment he took his eyes off and noticed the wind is when he began to sink. What the moral? Simple. Keep your eyes fixed on Jesus and walk on water. Take your eyes off him and sink.

So, what do you want to do today?