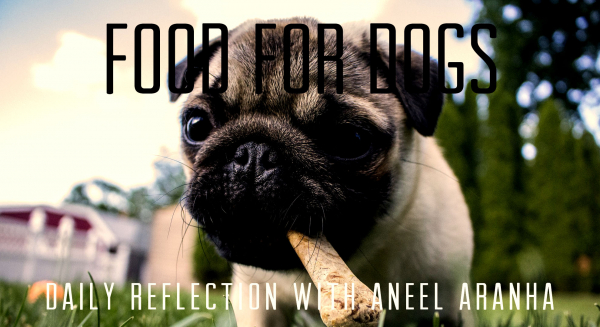 Jesus left that place and went away to the district of Tyre and Sidon. Just then a Canaanite woman from that region came out and started shouting, “Have mercy on me, Lord, Son of David; my daughter is tormented by a demon.” But he did not answer her at all. And his disciples came and urged him, saying, “Send her away, for she keeps shouting after us.” He answered, “I was sent only to the lost sheep of the house of Israel.” But she came and knelt before him, saying, “Lord, help me.” He answered, “It is not fair to take the children’s food and throw it to the dogs.” She said, “Yes, Lord, yet even the dogs eat the crumbs that fall from their masters’ table.” Then Jesus answered her, “Woman, great is your faith! Let it be done for you as you wish.” And her daughter was healed instantly.

I find myself fascinated by the way Jesus responds to requests for healing because many of them are simply bizarre. He once put his fingers in the ears of a man who couldn’t hear. He spat on his hands and touched the tongue of a man who couldn’t talk. He did the spitting trick again with a blind man, only this time he spat on the ground, made a little mudpack and pasted it on the man’s eyes telling him to go wash himself in a local pool. Utterly fascinating, don’t you think?

In this story, he doesn’t say a word. A woman comes to him asking for her daughter to be delivered from a demonic spirit and he just keeps quiet. Have you ever spoken to someone who doesn’t speak back to you? If you have ever been married and had a fight with your wife, you certainly have. If feels weird, right? I imagine that’s how this woman felt. Weird. Then the disciples come and tell Jesus to send her away, right in front of her. He says, almost in affirmation, that he’s sent only to the lost sheep of Israel.

As as interesting aside, the lost sheep of Israel should have known Jesus was the Messiah —they had been waiting for him long enough — only they didn’t. They kept asking for a sign after he had already given them a gazillion signs. And here was a pagan woman who, for some reason, was convinced he was the Messiah. She didn’t seem perturbed by what Jesus said. Scripture says she came and did him homage, which means she worshipped him. “Lord, help me,” she pleaded.

And Jesus then says the strangest thing: “It is not right to take the food of the children and throw it to the dogs.” Taken at face value, it may seem like Jesus is insulting the woman but is that what he is doing? Imagine you are that woman. Go on, seriously, imagine you are that woman. What would you have done? How would you have reacted? Most of you would have walked off in a huff, grumbling: “Who does he think he is? I go to him for help for my daughter and he calls me a dog! And he says he is the Messiah.” Isn’t this how we would have reacted?

And there is the lesson. Faith requires humility. Imagine the universe with a billion galaxies, each with trillions of stars and planets. Our God is bigger than that. What is man before God? More than a dog? We’re not even a speck of dust in the entire universe. Yet, Scripture says God is mindful of us (see Psalm 8:4). He was mindful of that woman. He wasn’t demeaning her; he just wanted to see if she understood the truth about the person she had worshipped. Faith is more than a declaration that we believe in God; it is an understanding of who that God is and who we are in comparison.

She understood. And he healed her. I hope we understand too.