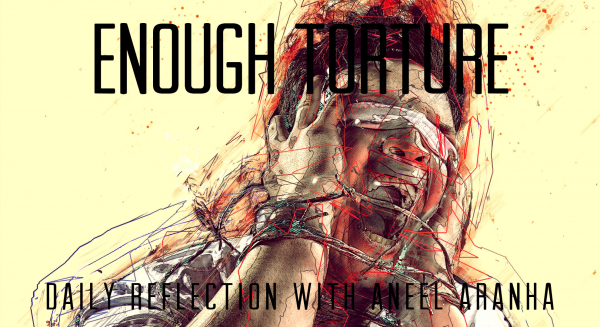 Then Peter came and said to him, “Lord, if another member of the church sins against me, how often should I forgive? As many as seven times?” Jesus said to him, “Not seven times, but, I tell you, seventy-seven times. “For this reason the kingdom of heaven may be compared to a king who wished to settle accounts with his slaves. When he began the reckoning, one who owed him ten thousand talents was brought to him; and, as he could not pay, his lord ordered him to be sold, together with his wife and children and all his possessions, and payment to be made. So the slave fell on his knees before him, saying, ‘Have patience with me, and I will pay you everything.’ And out of pity for him, the lord of that slave released him and forgave him the debt. But that same slave, as he went out, came upon one of his fellow slaves who owed him a hundred denarii; and seizing him by the throat, he said, ‘Pay what you owe.’ Then his fellow slave fell down and pleaded with him, ‘Have patience with me, and I will pay you.’ But he refused; then he went and threw him into prison until he would pay the debt. When his fellow slaves saw what had happened, they were greatly distressed, and they went and reported to their lord all that had taken place. Then his lord summoned him and said to him, ‘You wicked slave! I forgave you all that debt because you pleaded with me. Should you not have had mercy on your fellow slave, as I had mercy on you?’ And in anger his lord handed him over to be tortured until he would pay his entire debt. So my heavenly Father will also do to every one of you, if you do not forgive your brother or sister from your heart.” When Jesus had finished saying these things, he left Galilee and went to the region of Judea beyond the Jordan.

Of all the things that God asks us to do, extending forgiveness towards people who have hurt us is the hardest thing to do. Much of the reason is the pain that we feel in our hearts, minds, spirit and soul, and if not treated quickly, the infection spreads to the body as well resulting in a lot of sickness.

Forgiving others forms a vital part of retreats that I conduct, because I have realized that there is so much of healing, not necessarily physical, that takes place when one is able to forgive others after receiving forgiveness from God that comes through true repentance. People are liberated and set free, and many lead changed lives after such a session. However, there are some people who are stubborn in their refusal to forgive.

A few years ago during a mission to England I met a man who was in terrible shape. He was sick to the point of dying. His business had collapsed. And his family had left him. I realized that at the root of everything was deep-rooted unforgiveness towards a lot of people in his life. I told him that there was a good chance God would restore everything if he forgave them, but he said it didn’t matter if he died, he wouldn’t forgive anybody.

What do you call somebody so obstinate he would rather suffer than be merciful? Stupid? I guess, but are we any different? We accept God’s mercy, but are reluctant to extend mercy towards others. The servant in this story does that. He has a huge unpayable debt wiped off by his master, but he refuses to forgive a small debt owed him by somebody else. In anger his master turns him over to the jailors to be tortured.

And then Jesus says these words that somehow we don’t seem to hear: “This is how my Heavenly Father will treat each one of you unless he forgives his brother or sister from his heart.” It is not so much him turning us over to the torturer (who is the devil, of course) to be tortured as us turning ourselves over to him. And he does torture us, doesn’t he? In the mind, in the heart, in the spirit, in the soul, and eventually in the body.

Set yourself free today. Forgive everybody and see how things change.