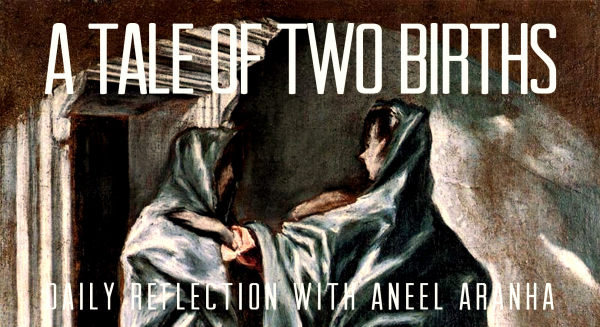 Mary set out and traveled to the hill country in haste to a town of Judah, where she entered the house of Zechariah and greeted Elizabeth. When Elizabeth heard Mary's greeting, the infant leaped in her womb, and Elizabeth, filled with the Holy Spirit, cried out in a loud voice and said, "Blessed are you among women, and blessed is the fruit of your womb. And how does this happen to me, that the mother of my Lord should come to me? For at the moment the sound of your greeting reached my ears, the infant in my womb leaped for joy. Blessed are you who believed that what was spoken to you by the Lord would be fulfilled." And Mary said:  What Mary says is the Magnificat, and I will read it at the end of the reflection.  Mary remained with her about three months and then returned to her home.

This is the story describing an encounter between two women, both carrying miracle babies in their wombs. One, Elizabeth, is pregnant with child in her old age; the other, Mary, is pregnant with a child born of the Holy Spirit. And while there are so many things that one can reflect upon, I want to consider why Luke began his narrative with the announcement of the birth of John rather than the birth of Jesus.

It was to contrast the two births. One, in the first narrative we find the angel going to Zechariah, who is a man. Mary, of course is a woman, and although there have been some prominent women in the Bible, this has been a rarity.  Two, Zechariah is a man of some importance. He is a chief priest. Mary is a woman that nobody has ever heard of.

Three, when the angel greets him, Zechariah is in the temple engaged in an act of worship. Nobody knows what Mary was doing when the angel visits her. Four, Zechariah is in Jerusalem, which is the heart of Israel. Mary is in Nazareth, and although some translations refer to it as a town, in truth it was little more than a village with about a hundred inhabitants at the time of this story.

So, what do we surmise from these differences? That God was making a statement of sorts. In choosing a woman nobody knew in a village nobody hard heard of, he was letting the world know that the greatest event in human history was taking place simply because of sovereign grace and he made this abundantly clear in everything that followed.

And, here, in this narrative where Mary professes one of the greatest prayers in Christian tradition, the Magnificat, this is exactly what she declares. In light of what we have just reflected upon, let us read it now:

"My soul proclaims the greatness of the Lord; my spirit rejoices in God my Savior for he has looked with favor on his lowly servant. From this day all generations will call me blessed: the Almighty has done great things for me and holy is his Name. He has mercy on those who fear him in every generation. He has shown the strength of his arm, and has scattered the proud in their conceit. He has cast down the mighty from their thrones, and has lifted up the lowly. He has filled the hungry with good things, and the rich he has sent away empty. He has come to the help of his servant Israel for he has remembered his promise of mercy, the promise he made to our fathers, to Abraham and his children forever."