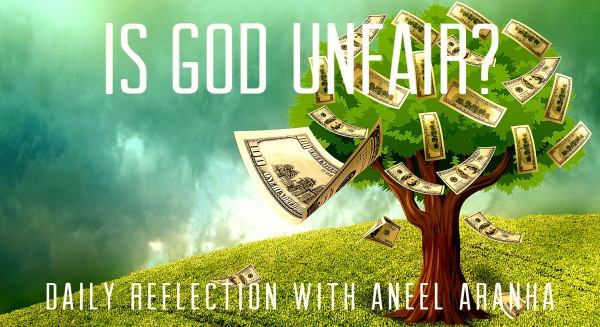 “For the kingdom of heaven is like a landowner who went out early in the morning to hire laborers for his vineyard. After agreeing with the laborers for the usual daily wage, he sent them into his vineyard. When he went out about nine o’clock, he saw others standing idle in the marketplace; and he said to them, ‘You also go into the vineyard, and I will pay you whatever is right.’ So they went. When he went out again about noon and about three o’clock, he did the same. And about five o’clock he went out and found others standing around; and he said to them, ‘Why are you standing here idle all day?’ They said to him, ‘Because no one has hired us.’ He said to them, ‘You also go into the vineyard.’ When evening came, the owner of the vineyard said to his manager, ‘Call the laborers and give them their pay, beginning with the last and then going to the first.’ When those hired about five o’clock came, each of them received the usual daily wage. Now when the first came, they thought they would receive more; but each of them also received the usual daily wage. And when they received it, they grumbled against the landowner, saying, ‘These last worked only one hour, and you have made them equal to us who have borne the burden of the day and the scorching heat.’ But he replied to one of them, ‘Friend, I am doing you no wrong; did you not agree with me for the usual daily wage? Take what belongs to you and go; I choose to give to this last the same as I give to you. Am I not allowed to do what I choose with what belongs to me? Or are you envious because I am generous?’ So the last will be first, and the first will be last.”

The Parable of the Prodigal Son is one of the most famous stories in the Bible - It’s in Luke 15; I am sure you know it - and is used as an illustration of the great love that God has for sinners. However, I discovered that a lot of people don’t like the parable, because they believe the father is being unjust. How, they ask, can the father be so good to his son who has squandered half his fortune in sinful living, while the elder, obedient son gets the short end of the stick.

This is another story that seems patently unfair to many. How can those who have worked hard all day be paid the same wages as people who have worked for just an hour? Isn’t this grossly unjust? It is, but only if we look at these things from a worldly perspective. As we have seen several times over the past few months, the Kingdom of Heaven operates very differently, and as citizens of heaven, we need to understand the ways of heaven. Here are three things we learn from this parable.

One, do not have a commercial spirit. In the world we work for our wages, and barring the occasional bonus, we get paid depending on the work we do. However, isn’t it a lot more sensible to be like children, depending on the Father, rather than our own efforts, to be rewarded. He will give us everything we need. In this story he gave ALL the laborers what they needed. He didn’t short change anybody.

Two, do not have a competitive spirit. At the end of the Gospel of John, Jesus restores Peter (remember the three times he asks Peter if he loves him?). Then the two set off, but Peter notices that John is following them. “What are you going to do about him?” Peter wants to know, and Jesus tells him it is none of his business. When we look at the blessings others receive we get jealous and lose focus of the blessings we have received. That’s what happened in this story.

Three, do not have a complaining spirit. When we grumble we too exhibit a marked lack of gratitude. The laborers in the vineyard should have been thankful for the employment that they had obtained, especially because they knew too well that many didn’t have jobs. When they grumbled not only did they show their ingratitude towards the landowner, they lost the pleasure they had in having gainful employment.