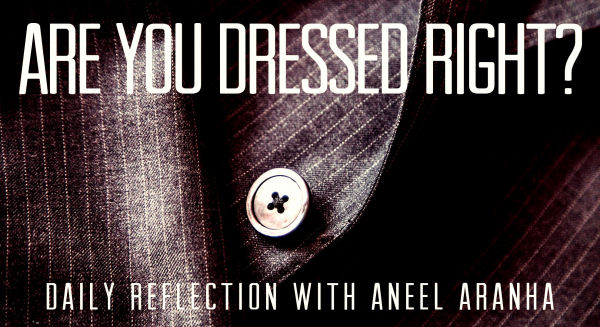 Once more Jesus spoke to them in parables, saying: “The kingdom of heaven may be compared to a king who gave a wedding banquet for his son. He sent his slaves to call those who had been invited to the wedding banquet, but they would not come. Again he sent other slaves, saying, ‘Tell those who have been invited: Look, I have prepared my dinner, my oxen and my fat calves have been slaughtered, and everything is ready; come to the wedding banquet.’ But they made light of it and went away, one to his farm, another to his business, while the rest seized his slaves, mistreated them, and killed them. The king was enraged. He sent his troops, destroyed those murderers, and burned their city. Then he said to his slaves, ‘The wedding is ready, but those invited were not worthy. Go therefore into the main streets, and invite everyone you find to the wedding banquet.’ Those slaves went out into the streets and gathered all whom they found, both good and bad; so the wedding hall was filled with guests. “But when the king came in to see the guests, he noticed a man there who was not wearing a wedding robe, and he said to him, ‘Friend, how did you get in here without a wedding robe?’ And he was speechless. Then the king said to the attendants, ‘Bind him hand and foot, and throw him into the outer darkness, where there will be weeping and gnashing of teeth.’ For many are called, but few are chosen.”

Jesus has told many weird stories, but this one tops the list. A king throws a wedding feast for his son and sends his servants to invite people for it but they turn down the invitation. Who turns down an invitation to a feast, that too thrown by a king? Anyway, the king decides to sweeten the invitation by sending other servants out with the message that the feast was going to be really spectacular with loads to eat, but again they refuse to come. Who refuses food? Definitely not Janet.

Then something even crazier happens. They beat up the servants and kill them. The furious king sends his troops to murder the murderers and sets fire to his own city. Then as the city is burning, he sends other servants to invite whoever they could find on the streets, and get them for the feast. The hall is soon packed. The king enters and sees somebody who is not dressed up properly (these guys are picked up from the street, remember?) and orders him bound and tossed out.

Now obviously, there is a whole lot of symbolism at play here and it is beyond the scope of this reflection to go into detail about the various elements, but simply (and perhaps a little simplistically): The king is God. The Son is Jesus. The wedding feast is salvation. The invitation is first extended to the Jews, who should have attended because they were the chosen ones. However, they reject Christ. So the invitation is opened to everybody else, good and bad. That’s us. We are the beneficiaries of a very unexpected invitation.

Now, all of us are at the feast, but it seems like there is a garment that need to be worn. What might that garment be? Could it be the garment of salvation, perhaps? The robe of righteousness that comes through faith in Christ Jesus? Do you remember how the prodigal son was given a robe when he returned home, just before the feast? It is a robe that we are all given when we are baptized in Christ. It is freely given. As Paul declares, For “By grace you have been saved through faith, and this is not your own doing; it is the gift of God— not the result of works, so that no one may boast” (Ephesians 2:8-9).

But having received the robe, we need to keep it on, right? We need to continue to walk in the righteousness of Christ. However, many of us take this robe off, leading lives of degeneracy. We seem to forget that we are at the banquet of a king. Who behaves improperly at a royal banquet? Well, if they do, then we know what happens to them. As Jesus says, they will be cast into the darkness where there will be wailing and grinding of teeth.

But that need not be our fate. Let us enjoy the great feast our great God has prepared for us. And party!