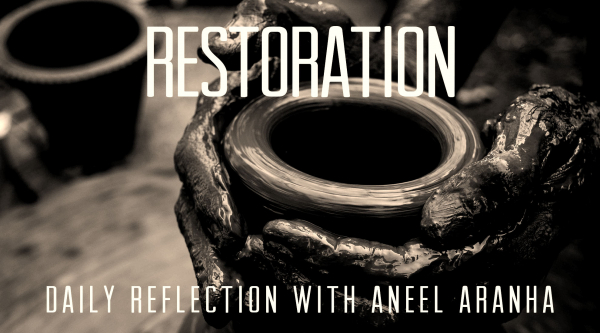 “Woe to you, scribes and Pharisees, hypocrites! For you are like whitewashed tombs, which on the outside look beautiful, but inside they are full of the bones of the dead and of all kinds of filth. So you also on the outside look righteous to others, but inside you are full of hypocrisy and lawlessness. Woe to you, scribes and Pharisees, hypocrites! For you build the tombs of the prophets and decorate the graves of the righteous, and you say, ‘If we had lived in the days of our ancestors, we would not have taken part with them in shedding the blood of the prophets.’ Thus you testify against yourselves that you are descendants of those who murdered the prophets. Fill up, then, the measure of your ancestors.

One of my favorite characters in the Bible is a man called Nehemiah. I’d like to tell you why, but first I need to give you a little history lesson. Very short one, I promise. In 605 BC King Nebuchadnezzar of Babylon invaded Jerusalem and besieged the city. He destroyed some of the city, killed a lot of people, and took others prisoner. Over the next 20 years, every time there was a rebellion,  he would march back into Jerusalem, destroy more of the city, kill more people, and take more prisoner.

Many, many years later in the rule of King Darius (537 BC), the Jews were allowed to return to their land, and they started rebuilding the city and the temple, but the walls were still broken. And this brings us to Nehemiah. Nehemiah, one of the exiles, was the cup bearer to King Artaxerxes, the current ruler. One day his brother came from Jerusalem to visit and described the condition of the city to Nehemiah, especially the state of the walls that were never rebuilt. Distressed by the news, Nehemiah broke down and wept. Then he spent days in prayer and fasting, trying to understand why the walls couldn’t be built.

Some might have concluded that it was bad organization or a lack of resources that prevented the rebuilding of the wall, and although both were contributory factors that would need to be addressed, Nehemiah understood that the real problem was sin! And this included his own sin! So be began by confessing it. “I confess the sins we Israelites, including myself and my father’s family, have committed against you,” he said. “We have acted very wickedly toward you. We have not obeyed the commands, decrees and laws you gave your servant Moses” (Nehemiah 1:6-7). Then he went to Jerusalem and rebuilt the walls in 52 days!

Now, what has this gotta do with today’s passage? A lot, really. See, over the years God has sent prophets to the Israelites warning them about the consequences of their sins, but instead of paying heed, they had the prophets put to death. Now God had sent his Son, hoping they would listen to him. But we all know what they did to Jesus. Why? Because they portrayed themselves as holy people, devout people, and they didn’t like anybody telling them that they weren’t. So they proved how “holy” they were by committing murder!

Let us not be like them. Let us, instead, be like Nehemiah and tell God that we are sorry: first for our personal sins, then for the sins of our family, then for the sins of the church, and finally for the sins of our nation and our world. And we have God’s assurance that “if we confess our sins, he is faithful and just and will forgive us our sins and purify us from all unrighteousness” (1 John 1:9). We also have God’s promise given right through Scripture that if we repent, he will restore us that we may serve him; and if we utter worthy words we will be his spokesman (see Jeremiah 15:19).