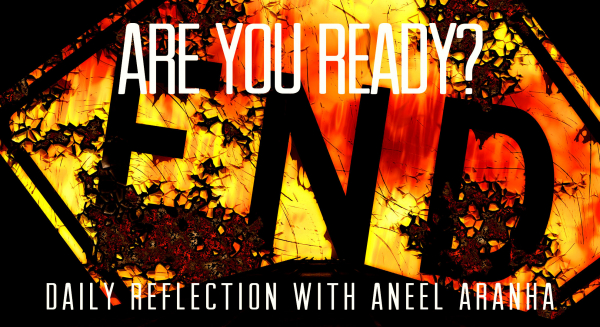 “Then the kingdom of heaven will be like this. Ten bridesmaids took their lamps and went to meet the bridegroom. Five of them were foolish, and five were wise. When the foolish took their lamps, they took no oil with them; but the wise took flasks of oil with their lamps. As the bridegroom was delayed, all of them became drowsy and slept. But at midnight there was a shout, ‘Look! Here is the bridegroom! Come out to meet him.’ Then all those bridesmaids got up and trimmed their lamps. The foolish said to the wise, ‘Give us some of your oil, for our lamps are going out.’ But the wise replied, ‘No! there will not be enough for you and for us; you had better go to the dealers and buy some for yourselves.’ And while they went to buy it, the bridegroom came, and those who were ready went with him into the wedding banquet; and the door was shut. Later the other bridesmaids came also, saying, ‘Lord, lord, open to us.’ But he replied, ‘Truly I tell you, I do not know you.’ Keep awake therefore, for you know neither the day nor the hour.

In the parable of the Faithful and Unfaithful Servant, Jesus speaks about how terrible it would be for the servant who is found behaving badly when the master arrives unexpectedly. This parable also speaks about his return. But over two thousand years have passed since Jesus went away and there are many who don’t believe that he will be back. Even those who do don’t believe it will be any time soon. When is the last time you heard a sermon preached about the return of Jesus? Or a prayer said to hasten his coming? Yet, we have Jesus’ word that he would be returning. So, why the delay then, you might ask.

Peter might have an answer. I paraphrase a passage from 2 Peter 3: You gotta understand this. In the last days people will scoff as they indulge their lusts saying, “He said he was coming. Where is he? Everything is just as it was.” But remember that with the Lord one day is like a thousand years, and a thousand years are like one day. The Lord is not slow in keeping his promise, but is patient with you, not wanting any to perish, but all to come to repentance.” And then he too speaks about the suddenness with which Jesus would come.

If you believe in Scripture, you have to believe that Jesus is coming again. You believe that, yes? When? Nobody knows, really, but it could be today. If it is, are you ready? Fire departments sometimes do a drill in buildings to check the readiness of tenants in the event there is a fire. Let us do something similar to check our own readiness for the return of the Lord. When that trumpet blast sounds, do you think you’re ready to go with him to the wedding feast that awaits the victorious?

There are several checks, but let us just consider three. One: Have we been leading a life that reflects one who is born again, allowing ourselves to be led and guided by the Holy Spirit in all that we do? Or do we persist in living in the flesh, giving in to our desires without second thought about the consequences. Remember how Esau sold his birthright to Jacob just because he was hungry for a bowl of soup? Are we doing what Esau did?

Two: Do we show, by our actions that our faith does not merely comprise belief in Jesus as Savior, but also believe that everything he says is true? Or do we think we can pick and choose whatever we want to follow and discard the rest? And, three: Are the good works we do for the glory of God or to gain the acclaim of our fellow man? This is a fascinating parable with much to teach us, so if you are interested to read more, please click here for an article I wrote about it.

May we be wise.