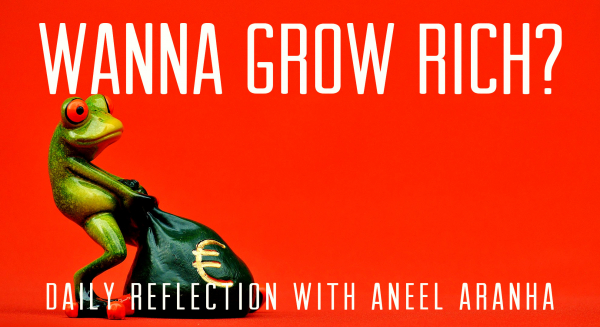 Let me summarize the story in a few words. A man goes away. He leaves his servants with talents: he gives five to one, two to another, and one to a third. The first two servants double what they had been given, but the third buries his talent in the ground. The master returns, and is very pleased with the first two servants, whom he rewards. But he gets furious with the third. He gives his talent to the first servant, then chucks the servant into the darkness where, to quote Jesus, “there will be wailing and grinding of teeth.”

To the seeker of the truth there are a lot of questions that crop up here. Why, for instance, the unequal distribution of talents? Well, for one, the talents are the owner’s to give, and up to him to choose how he wants to distribute them. Right? He also, undoubtedly, saw the capabilities of each servant and gave accordingly, hoping that each of them would do the best with what they were given.

Another question is why take the talent from the servant who did nothing with it and give it to the first servant and not the second. After all both showed they could be trusted. Again, it is the owner’s prerogative to decide what he wants to do with what is his. But using the same reasoning as with the previous question, the first servant showed that he was extremely capable of handling a big load, so an additional burden would not have been too taxing. Besides, the second servant **was** given more responsibilities.

A third question—and this is really the interesting one—why didn’t the third servant do something with the one talent that he had been given? Why did he bury it? I believe it is because he was jealous that the other two had received more than he had. So, out of spite and resentment, he did nothing. Big mistake. I have said this before in past reflections, but it is something worth repeating. When we look at the blessings that others have received, we lose sight of our own.

We are like the servants in this story who have been blessed with gifts from God. They are not for our pleasure or profit; they are intended to be used in the service of God. Are we using them wisely? Or are we wasting them? Please remember that there is going to be a reckoning. Even as we reflect upon this, a word of encouragement to those who think they have received too little in comparison with others. Keep this promise of Jesus in mind: “Whoever is faithful in a very little is faithful also in much; and whoever is dishonest in a very little is dishonest also in much” (Luke 16:10).

Consequently, to everyone who has more will be given and he will grow rich. May you grow very rich with the things of God.