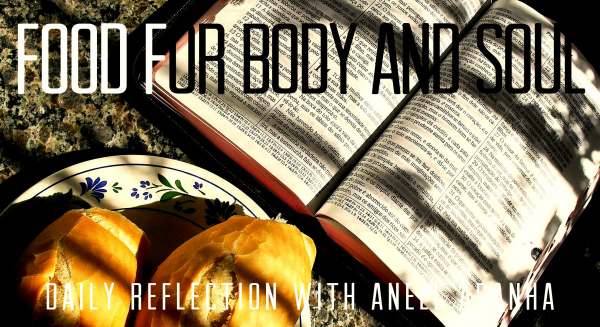 Jesus left there and went along the Sea of Galilee. Then he went up on a mountainside and sat down. Great crowds came to him, bringing the lame, the blind, the crippled, the mute and many others, and laid them at his feet; and he healed them. The people were amazed when they saw the mute speaking, the crippled made well, the lame walking and the blind seeing. And they praised the God of Israel. Jesus called his disciples to him and said, “I have compassion for these people; they have already been with me three days and have nothing to eat. I do not want to send them away hungry, or they may collapse on the way.” His disciples answered, “Where could we get enough bread in this remote place to feed such a crowd?” “How many loaves do you have?” Jesus asked. “Seven,” they replied, “and a few small fish.” He told the crowd to sit down on the ground. Then he took the seven loaves and the fish, and when he had given thanks, he broke them and gave them to the disciples, and they in turn to the people. They all ate and were satisfied. Afterward the disciples picked up seven basketfuls of broken pieces that were left over.

Do you know what fascinates me about this story? That people would remain in the presence of Jesus for three days, eager to be with him and listen to what he had to say. They hungered, surely for food, but more for the word of God. And then I contrast this with folks today who complain if the sermon goes over five minutes and think, “Really, guys?”

It isn’t the delivery of God’s word that changes us; it is our receptivity to it. Soon after my conversion, I went for a closed retreat that was five days long. They locked the gates after you entered and didn’t let you leave until the retreat was over five days later. It was an extraordinary experience. Not all the preachers were great. Some of them were downright dull in their delivery, but their words were impactful anyway.

How? Because it isn’t so much how the message of God is proclaimed as our own receptivity to it.

Paul, whose letters comprise much of the New Testament, was not a great speaker. As he says himself, “I came to you in weakness with great fear and trembling. My message and my preaching were not with wise and persuasive words (1 Corinthians 2:3). His critics agreed. “He is unimpressive, and his speaking amounts to nothing,” they said (2 Corinthians 10:10). But his words had an impact because they were “a demonstration of the Spirit’s power so that your faith might not rest on human wisdom” (2 Corinthians 2:4).

So let us hunger for the word of God, regardless of who proclaims it and how passionately they do so. And we are nurtured and nourished, not just spiritually but also physically. After preaching to the crowds for three days, Jesus was mindful of their bodies as well, so he fed them. This was miracle food because there was not enough anywhere to feed the multitude.

Jesus is equally mindful of our physical needs today as well. This is why he says, “Do not worry about your life, what you will eat or drink. Is not life more than food? Look at the birds of the air; they do not sow or reap or store away in barns, and yet your heavenly Father feeds them. Are you not much more valuable than they? So seek first his kingdom and his righteousness, and all these things will be given to you as well”. That’s from Matthew 6:25-34.

So, hunger for spiritual food, and you will get food for the body as well.