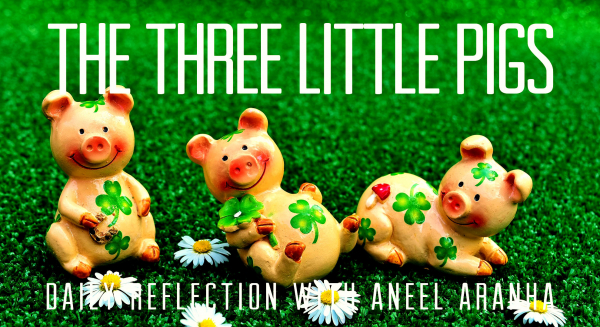 Whenever I read this, I am reminded of the fable about the Three Little Pigs. Do you know the story? Three pigs built houses for themselves. One makes it out of straw, another out of sticks, and the third out of bricks. A Big Bad Wolf comes, and he huffs, and he puffs, and he blows the first house down and gobbles up the pig. He does the same thing to the second house and the second pig. But he is unable to destroy the third pig’s house.

And whenever I read this fable, I am reminded of Peter’s advice to “be alert and sober at all times because our enemy the devil prowls around like a roaring lion looking for someone to devour” (cf. 1 Peter 5:8). And I imagine the devil to be like the Big Bad Wolf huffing and puffing trying to blow our houses down. And our houses, if not solid, will fall down, and he will devour us.

So how do we make our houses strong? Paul tells us.  In his first letter to the Corinthians, he writes (and I paraphrase): “By the grace God has given me, I laid a foundation as a wise builder. But every one should build with care because you can’t lay a foundation other than one already laid, which is Jesus Christ. One day this will be revealed with fire, and the fire will test the quality of each person’s work” (cf. 1 Corinthians 3:10-15).

Jesus has to be the foundation of our houses, which of course, is a euphemism for our lives. Which means he has to be the Lord of our lives. It isn’t enough that we say, “Yes, Lord!” We have to do what he asks us to do. But unfortunately, we tend to be very selective about what we do, don’t we? If it suits us, we are only too happy to do what he asks us to do, but if it doesn’t, Jesus could take a hike.  The danger is that we might end up taking a hike to destinations we would rather not go to.

As Jesus says, “Not everyone who says to me, ‘Lord, Lord,’ will enter the kingdom of heaven, but only the one who does the will of my Father in heaven.” And then he says this, although it is omitted from today’s reading. Many will say to me on that day, ‘Lord, Lord, did we not prophesy in your name and in your name drive out demons and in your name perform many miracles?’ Then I will tell them plainly, ‘I never knew you. Away from me, you evildoers!’

The wolf is at the door. How strong is your house?