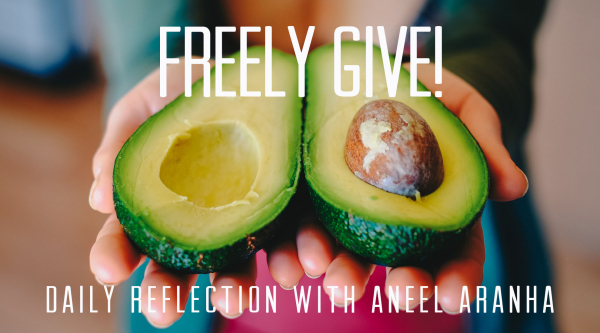 Then Jesus went about all the cities and villages, teaching in their synagogues, and proclaiming the good news of the kingdom, and curing every disease and every sickness. When he saw the crowds, he had compassion for them, because they were harassed and helpless, like sheep without a shepherd. Then he said to his disciples, “The harvest is plentiful, but the laborers are few; therefore ask the Lord of the harvest to send out laborers into his harvest.” Then Jesus summoned his twelve disciples and gave them authority over unclean spirits, to cast them out, and to cure every disease and every sickness. These twelve Jesus sent out with the following instructions: As you go, proclaim the good news, ‘The kingdom of heaven has come near.’ Cure the sick, raise the dead, cleanse the lepers, cast out demons. You received without payment; give without payment.

As Jesus sends his apostles out to preach the good news, he gives them a list of instructions. Among them is this one: “You received without payment; give without payment.” Or, as another translation reads, “Freely you have received; freely give.” Whatever Jesus had given the apostles had been without cost; consequently, they were not to expect remuneration from others. They were to serve without greed and without guile, showing that their only interest was proclaiming the kingdom of God, not material gain.

His accompanying instructions not to carry more than the bare minimum for their journeys suggested how much Jesus valued a “poverty of spirit.” “Blessed are the poor in spirit, he said in his sermon on the mount, “for theirs is the kingdom of heaven” (Matthew 5:3). This is because those who are “poor in spirit” depend on God for their every need, and this keeps them rooted in him. This is why there is wonderment when one hears of Christian spiritual leaders demanding enormous fees for services rendered or asking to be paid in return for prayers.

But Jesus then says that “the worker deserves his wages” (Matthew 10:10). Isn’t he contradicting himself? No, because although the worker was not to expect anything from the people he was serving, the people being served had a duty toward the worker serving them. They had to take care of him and his needs. Paul quotes what Jesus says in his letter to Timothy, advising him that the church needs to look after its pastors (see 1 Timothy 5:17-18). However, we often fail to realize this, believing that whatever we get should be free without considering the needs of those we get it from!

So, there is a message here for both the server and the served that both should pay heed to. The former should serve without expectation of material reward. This doesn’t mean they should lead destitute lives; it just means they should remain detached from material goods and creature comforts. As for the latter, they should ensure that God’s workers are provided for because without them, there would be nobody to preach the good news.

And that spells very bad news for the people of this world.