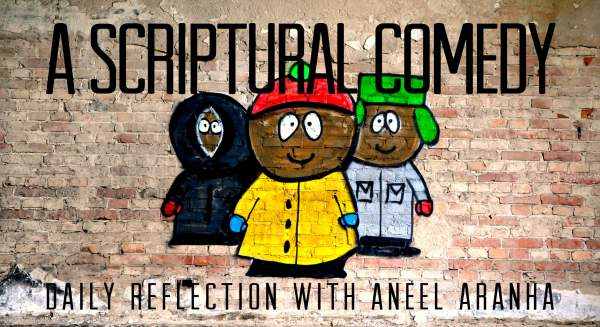 One day Jesus was teaching, and Pharisees and teachers of the law were sitting there. They had come from every village of Galilee and from Judea and Jerusalem. And the power of the Lord was with Jesus to heal the sick. Some men came carrying a paralyzed man on a mat and tried to take him into the house to lay him before Jesus. When they could not find a way to do this because of the crowd, they went up on the roof and lowered him on his mat through the tiles into the middle of the crowd, right in front of Jesus. When Jesus saw their faith, he said, “Friend, your sins are forgiven.” The Pharisees and the teachers of the law began thinking to themselves, “Who is this fellow who speaks blasphemy? Who can forgive sins but God alone?” Jesus knew what they were thinking and asked, “Why are you thinking these things in your hearts? Which is easier: to say, ‘Your sins are forgiven,’ or to say, ‘Get up and walk’? But I want you to know that the Son of Man has authority on earth to forgive sins.” So he said to the paralyzed man, “I tell you, get up, take your mat and go home.” Immediately he stood up in front of them, took what he had been lying on and went home praising God. Everyone was amazed and gave praise to God. They were filled with awe and said, “We have seen remarkable things today.”

Are you a visual person? I hope you are because this is a hilarious story if you can imagine the looks on everybody’s face! Being a preacher, the first person who comes to mind is Jesus. He is preaching to a packed room filled with people when suddenly debris starts to fall from the sky! He looks up and sees clunks of mud coming down, dirtying his clean white robe, and then he realizes he has lost his entire audience, who are staring open-mouthed at the drama unfolding over their heads.

Can you imagine the look on Peter’s face? It was probably his house that Jesus was using as his temporary residence (see Mark 2:1), and I don’t think he would have been very amused, but he would surely have looked very comical as he watched a hole being systematically made in his ceiling. It would have had to have been at least 6 feet by 2 feet to pass a stretcher through.

Can you imagine the look on the man on the stretcher? He was probably terrified they were going to drop him! Bad enough being paralyzed, he would now end up with some broken bones too! From the time his friends came to pick him up, the whole episode would have been a nightmare! Hadn’t he gone to every doctor and faith healer in town? What was this Jesus guy going to do?

And then, Jesus, who regains his composure, tells the man who is lowered into the room that his sins are forgiven! Can you imagine the look on the paralyzed men’s faces when they heard this? They had gone to all that trouble to get their friend to Jesus, believing he would be healed, and Jesus was saying his sins were forgiven!!! And if their eyes became round with amazement, the eyes of the Pharisees would have narrowed at what they considered blasphemy!

But then Jesus gets drama into what has hitherto been a comedy as he says, “Which is easier, to say, ‘Your sins are forgiven you,’ or to say, ‘Stand up and walk’? But so that you may know who it is who stands in front of you, watch this.” He turned to the paralyzed man and said, “Stand up and go home.” And the man stands to what is probably a huge ovation, and then he goes home.

Put yourself in each person’s shoes and see how you would have acted or reacted. You would find the exercise very insightful.