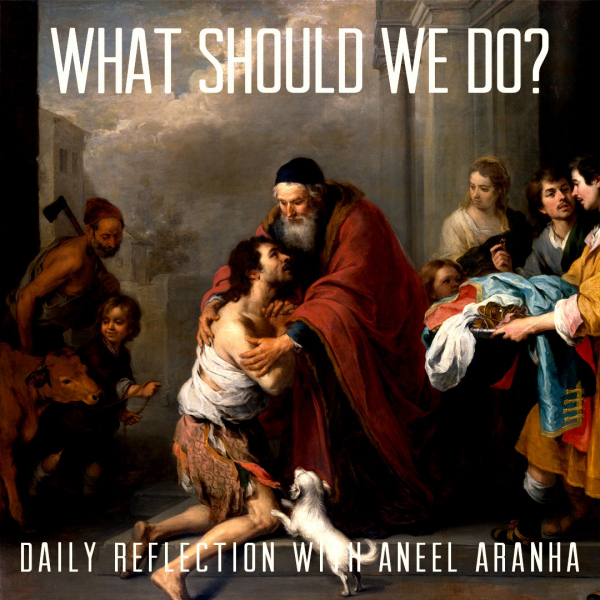 “What should we do then?” the crowd asked. John answered, “Anyone who has two shirts should share with the one who has none, and anyone who has food should do the same.” Even tax collectors came to be baptized. “Teacher,” they asked, “what should we do?” “Don’t collect any more than you are required to,” he told them. Then some soldiers asked him, “And what should we do?” He replied, “Don’t extort money and don’t accuse people falsely —be content with your pay.” The people were waiting expectantly and were all wondering in their hearts if John might possibly be the Messiah. John answered them all, “I baptize you with water. But one who is more powerful than I will come, the straps of whose sandals I am not worthy to untie. He will baptize you with the Holy Spirit and fire. His winnowing fork is in his hand to clear his threshing floor and to gather the wheat into his barn, but he will burn up the chaff with unquenchable fire.” And with many other words John exhorted the people and proclaimed the good news to them.

It's easy to be cynical, but I have realized that most people are essentially good at heart, and the sinful things they do are usually out of ignorance or weakness rather than malice. Once they are brought to a knowledge of the error of their ways, most people turn away from them, which is something that preachers should always keep in mind.

We find the same thing happening on the day of Pentecost about 2,000 years ago. Along with the other eleven apostles, Peter went out in the Spirit's power and preached his first sermon to the thousands gathered in Jerusalem for the feast. After telling them about who Jesus was, he said, "Therefore let the entire house of Israel know with certainty that God has made him both Lord and Messiah, this Jesus whom you crucified" (Acts 2:36).

And Scripture says that "when they heard this, they were cut to the heart and said to Peter and the other apostles, "Brothers, what should we do?" And as John the Baptist had done, Peter told them: "Repent and be baptized, every one of you, in the name of Jesus Christ for the forgiveness of your sins. And you will receive the gift of the Holy Spirit" (Acts 2:38).

Three thousand people accepted Christ as Savior that day. It is the result of preaching an undiluted gospel about sin, hell, the need for salvation, and Jesus the Savior.  Without a complete understanding of the former three, Jesus has no relevance, which is why preaching often does not have power. Today we preach three thousand sermons to bring one person to Christ perhaps.

So I hope you are asking the question: What should I do? The short answer: repent and be baptized.