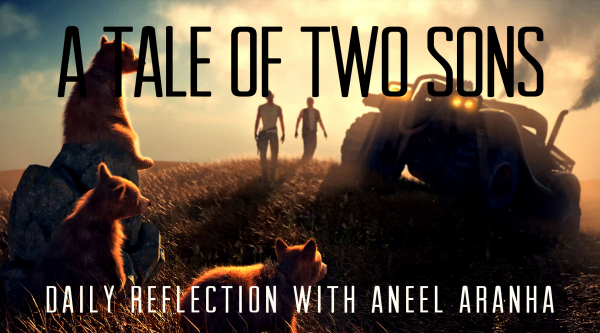 Jesus said: “What do you think? There was a man who had two sons. He went to the first and said, ‘Son, go and work today in the vineyard.’ “‘I will not,’ he answered, but later he changed his mind and went. Then the father went to the other son and said the same thing. He answered, ‘I will, sir,’ but he did not go. Which of the two did what his father wanted?” “The first,” they answered. Jesus said to them, “Truly I tell you, the tax collectors and the prostitutes are entering the kingdom of God ahead of you. For John came to you to show you the way of righteousness, and you did not believe him, but the tax collectors and the prostitutes did. And even after you saw this, you did not repent and believe him.

In this Parable of the Two Sons, Jesus speaks about a father who tells his two boys to go and work in the vineyard. One says he will go but doesn't. The other says he won't go but does. Then Jesus asks a question that seems almost rhetorical: "Which of the two did the will of the father?" The answer, quite obviously, is the second son, but Jesus is trying to make a point to the religious leaders he was speaking to. "Guys," he said, "the tax collectors and prostitutes are going to beat you into the kingdom of God. Do you know why?" I am sure they were too shocked to answer, but it is a question WE must answer because it has ramifications for us. And eternal ramifications, I might add.

So, let us understand this clearly. Why were the Pharisees like the second son? Because they said yes to God but weren't doing anything he told them to! But, you might argue, they were following all the rules, weren't they? Yes, but most of the rules they were following were of their own making! And in the process, they had completely forgotten the things that were important to God: justice and mercy and faith! (see Matthew 23:23). So, because they were blind to their failings, they believed they did not need to repent. No repentance, no forgiveness. No forgiveness, no salvation. Do you see? So, how do the sinners get in then? Because they realized their sinfulness. They acknowledged it and admitted it. They repented and were forgiven.

Let us return to the parable because we need to understand a few more crucial things. One, the father loved both his sons. He didn't play favorites. As Scripture says, "he makes his sun rise on the evil and on the good, and sends rain on the righteous and on the unrighteous" (Matthew 5:45). Two, both the sons were sinful. Again, as Scripture says, "all have sinned and fall short of the glory of God" (Romans 3:23). While we need to remind ourselves of the first fact, we also need to remind ourselves of the second! Otherwise, there is the very real danger we will become like the Pharisees.

Three, we are one of the two sons in this parable. And our father is saying to us: "Go and work in the vineyard today!" The vineyard is the world of lost souls. Our father needs our help in bringing his lost children back home. He can, undoubtedly, bring them back with a snap of his fingers, but in his infinite wisdom, he has chosen to make us partners in this task. And why not? Isn't it the son's pleasure to help his father in his business? One son — Jesus — did, even to the point of dying on the cross. What about us? Are we going to obey? Ultimately, this will determine which of the sons we are truly like.

So, are we going to work in the vineyard today, or will we postpone it for another day?