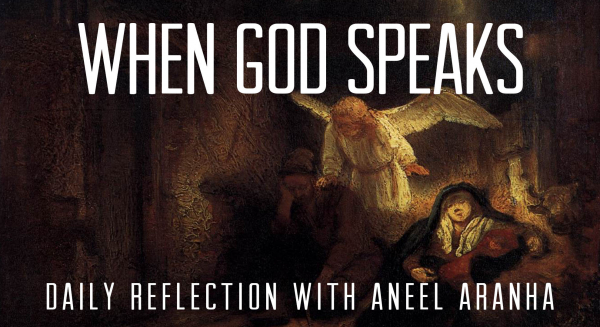 When Joseph woke up, he did what the angel of the Lord had commanded him and took Mary home as his wife. But he did not consummate their marriage until she gave birth to a son. And he gave him the name Jesus.

Have you ever been in a situation where it seemed like, no matter what you did, you were going to lose? Well, in our passage today, Joseph must have felt like that. Mary, the young girl to whom he was betrothed, had come to him with a very bizarre story about how she was pregnant by the Holy Spirit and how her child was going to be God’s son. What was he going to do?

He would have to deal with her apparent mental condition if he married her. Not to mention that he would be saddled with a child that wasn’t his. He would have to divorce her, but this would bring her much shame. And although there might have been a voice in his head that said, “Serves her right,” he was a decent man who didn’t want her to suffer public humiliation.

Did it ever strike him that she might be telling the truth? We will never know. But we understand, don’t we? Would we have acted differently? I doubt. In any event, as he sank into a troubled sleep, an angel appeared to him and told him that whatever Mary had told him was true, and he shouldn’t hesitate to take her for his wife. And he did! And now comes a similar question. Would we have acted the same?

Both Mary and Joseph were faced with crazy choices. I mean, you just have to put yourself in their shoes and see how crazy things got for them. A young teenager gets told she will give birth to the Son of God. Her husband, a simple man, is told the son he would raise would be the savior of the world. How do you wrap your head around these things? They probably never did, but they obeyed nonetheless.

This is faith, and we have seen every great character in the Bible exhibit this faith, from Noah and Nehemiah to Paul and Philip. They have not always understood things, but they went ahead and did what God told them to do anyway, and because they obeyed God, the world around them changed. We, too, may not understand everything God asks us to do, but we will be blessed if we obey.

And through us the world around us as well.