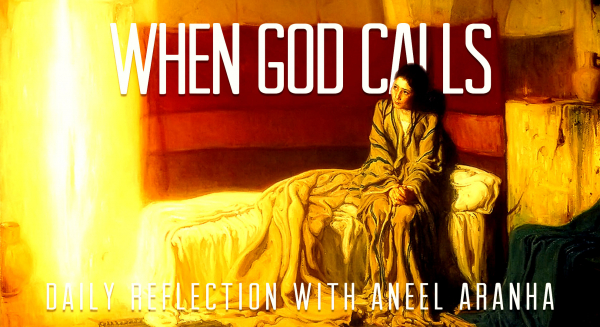 In the sixth month of Elizabeth’s pregnancy, God sent the angel Gabriel to Nazareth, a town in Galilee, to a virgin pledged to be married to a man named Joseph, a descendant of David. The virgin’s name was Mary. The angel went to her and said, “Greetings, you who are highly favored! The Lord is with you.” Mary was greatly troubled at his words and wondered what kind of greeting this might be. But the angel said to her, “Do not be afraid, Mary; you have found favor with God. You will conceive and give birth to a son, and you are to call him Jesus. He will be great and will be called the Son of the Most High. The Lord God will give him the throne of his father David, and he will reign over Jacob’s descendants forever; his kingdom will never end.” “How will this be,” Mary asked the angel, “since I am a virgin?” The angel answered, “The Holy Spirit will come on you, and the power of the Most High will overshadow you. So the holy one to be born will be called the Son of God. Even Elizabeth your relative is going to have a child in her old age, and she who was said to be unable to conceive is in her sixth month. For no word from God will ever fail.” “I am the Lord’s servant,” Mary answered. “May your word to me be fulfilled.” Then the angel left her.

I always find myself fascinated by this story of Mary, which teaches us so many lessons about discipleship. Perhaps the most important lesson that we can learn from it is how to respond to God's call, which can be very alarming. I have little doubt that Mary was utterly unnerved, first by an angel appearing to her and second by what the angel said to her.

We must remember that she was a very young girl when the angel visited her. How do we know she was young? Because Scripture tells us that Mary was betrothed at the time of the angel's visitation. We know from historical sources that women in those days were often betrothed when they were in their early teens. The marriage ceremony could take place an entire year later.

So, we have an angel coming to Mary and greeting her most strangely. "Greetings, favored one!" he says. "The Lord is with you." Scripture says Mary was "much perplexed by his words." The dictionary defines "perplexity" as being "completely baffled." I am not surprised. If you were a young teenage girl greeted like this, you would have been pretty baffled too. Was she afraid? Quite possibly, because the angel goes on to tell her, "Do not be afraid, Mary."

Confusion is a normal response to something new and strange. It's a built-in defense mechanism. So is fear. But we cannot allow confusion or fear to control or cripple us. Mary took the angel's words at face value and overcame her fear. If a representative of God said there was no reason for fear, then there was none. Mary accepted that, so when the angel told her even stranger things about how she would be a mother to the Son of God, she said ok.

Now God has plans for all of us. And Jesus tells us what they are. "Go and make disciples of all nations," he says, "baptizing them in the name of the Father and of the Son and of the Holy Spirit, and teaching them to obey everything that I have commanded you" (Matthew 28:19-20a). And, then, because he knows we will be afraid, he assures us: "And remember, I am with you always, to the end of the age" (Matthew 28:20b).

So, let us not be afraid.