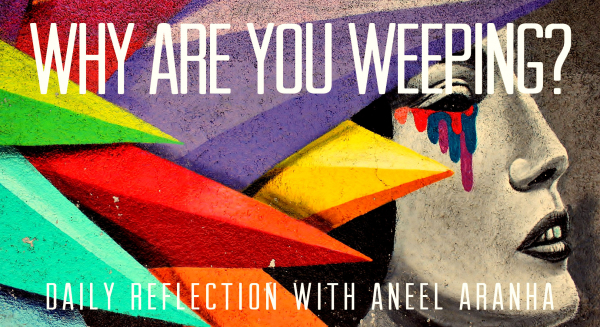 Early on the first day of the week, while it was still dark, Mary Magdalene went to the tomb and saw that the stone had been removed from the entrance. So she came running to Simon Peter and the other disciple, the one Jesus loved, and said, “They have taken the Lord out of the tomb, and we don’t know where they have put him!” So Peter and the other disciple started for the tomb. Both were running, but the other disciple outran Peter and reached the tomb first. He bent over and looked in at the strips of linen lying there but did not go in. Then Simon Peter came along behind him and went straight into the tomb. He saw the strips of linen lying there, as well as the cloth that had been wrapped around Jesus’ head. The cloth was still lying in its place, separate from the linen. Finally the other disciple, who had reached the tomb first, also went inside. He saw and believed.

What’s a resurrection story doing in the middle of the Christmas season? Well, it’s actually because today the church celebrates the feast of the apostle John, but I am glad we have this story because Christmas has no meaning without Easter. We wouldn’t celebrate the birth of Christ without his subsequent death and resurrection.

But I don’t want to talk about John today. I want to talk about Mary Magdalene because there is a tremendous lesson to be learned from her story. As you know, after Jesus died, he was taken down from the cross and his body laid in a tomb in a garden in the place he was crucified. Early on Sunday morning, Mary Magdalene goes to the tomb and sees the stone covering has been rolled away. So she runs to the disciples and says the body has been removed. She thinks somebody has taken it away.

Peter and John run, and although John reaches there first and sees the tomb empty, he waits for Peter to come. (Maybe he is too afraid to enter on his own!) They realize the body is truly gone and return to their homes. And to their lives. But Mary remains there, weeping. Then she looks into the tomb again and sees two guys sitting there. “Why are you weeping?” they ask. “They have taken the Lord out of the tomb, and we do not know where they have laid him.”

Then she turns, and there is another man who also asks her: “Why are you weeping?” She thinks he is the gardener and asks if he has taken the body. And he calls out her name, “Mary.” And the fact that he knew her name, and maybe the way he said it, made her recognize he was Jesus. “Rabbouni,” she says and rushes to embrace him.

Here is the question. Why is she weeping? Because although Jesus has told her (as he told the others) that he was going to die and rise again, she didn’t believe. When she saw the empty tomb, that’s the first thing she should have thought of, but she didn’t believe it. And so she wept. Are we any different? Jesus has told us many things. He has made us many promises of hope and blessings. He has assured us of his presence at all times.

So just a simple question for you today: Why are you weeping?