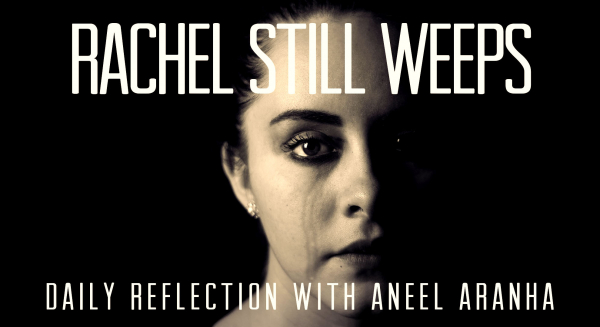 When they had gone, an angel of the Lord appeared to Joseph in a dream. “Get up,” he said, “take the child and his mother and escape to Egypt. Stay there until I tell you, for Herod is going to search for the child to kill him.” So he got up, took the child and his mother during the night and left for Egypt, where he stayed until the death of Herod. And so was fulfilled what the Lord had said through the prophet: “Out of Egypt I called my son.” When Herod realized that he had been outwitted by the Magi, he was furious, and he gave orders to kill all the boys in Bethlehem and its vicinity who were two years old and under, in accordance with the time he had learned from the Magi. Then what was said through the prophet Jeremiah was fulfilled: “A voice is heard in Ramah, weeping and great mourning, Rachel weeping for her children and refusing to be comforted, because they are no more.”

"A voice was heard in Raman, waiting and loud lamentation, Rachel weeping for her children; she refused to be consoled, because they are no more." What Jeremiah prophesied came to pass 2,000 years ago with the slaughter of hundreds of male children under the age of two in Bethlehem because a crazy ruler believed the child would grow up to overthrow his kingdom.

Today, Rachel continues to weep. So who is Rachel? And why does she weep? Rachel was the wife of Old Testament patriarch Jacob. After her first child, she didn't conceive for the longest time, and when she finally did (Genesis 30:1), it was only to die giving birth to Benjamin (Genesis 35:18, 19). She was buried at Ramah, near Bethlehem.

A few years later, during the deportation of the Jewish people to Babylon by King Nebuchadnezzar, many of the Israelites were detained at Ramah. Those too old or too weak to make the journey to Babylon were killed. Rachel, a kind of mother figure in the Old Testament, is said to have raised her head from her tomb and lamented the slaughter of the people. Many more years later, she would mourn the slaughter of some more innocents killed by King Herod.

She still weeps now, even more bitterly, because innocents continue to be slaughtered in greater numbers than ever before in human history through the abortion of babies in the wombs of their mothers. The numbers are so huge they boggle comprehension. And this year, just this year, over 40 million babies have been murdered.

We find the number of people who die in wars, terrorist attacks, and natural calamities horrifying, yet we don't seem to be affected by the vast number of babies being put to death? Why? Partly because we have been led to believe that what is growing within the mother's woman is not really human life and partly because we have become so calloused by sin, taking life doesn't seem to be an important thing! And we are taking life.

I gave a talk a few years ago on the subject, and I really would like you to see it. And share it. It could save somebody's life. https://youtu.be/PVI5dj32BCY