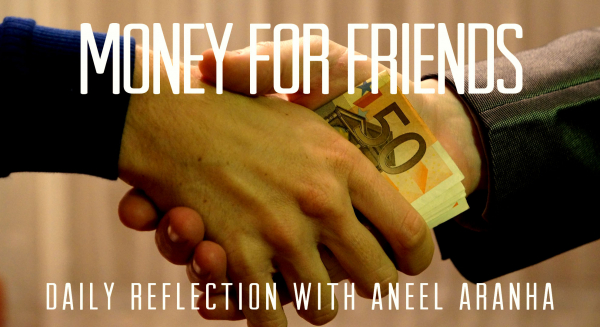 Jesus told his disciples: “There was a rich man whose manager was accused of wasting his possessions. So he called him in and asked him, ‘What is this I hear about you? Give an account of your management, because you cannot be manager any longer.’ “The manager said to himself, ‘What shall I do now? My master is taking away my job. I’m not strong enough to dig, and I’m ashamed to beg— I know what I’ll do so that, when I lose my job here, people will welcome me into their houses.’ “So he called in each one of his master’s debtors. He asked the first, ‘How much do you owe my master?’ “‘Nine hundred gallons of olive oil,’ he replied. “The manager told him, ‘Take your bill, sit down quickly, and make it four hundred and fifty.’ “Then he asked the second, ‘And how much do you owe?’ “‘A thousand bushels of wheat,’ he replied. “He told him, ‘Take your bill and make it eight hundred.’ “The master commended the dishonest manager because he had acted shrewdly. For the people of this world are more shrewd in dealing with their own kind than are the people of the light.

Jesus often used the evil deeds people did to teach some good truths. As one example, consider the Parable of the Unjust Judge (see Luke 18:1-8). The point of the story was that if a corrupt judge could grant justice to a grieving widow, how much more would a good judge—God—grant justice to us. It will be easier to understand the parable we are looking at today if we understand this because today's story can be very confusing.

This is the story in brief. A dishonest manager was spending money that didn't belong to him. His boss got wind of it and demanded an accounting. Knowing that his crime would be discovered, and he would be out of a job, he begins ingratiating himself to his debtors so that — pay attention here — they would welcome him into their homes. So, he calls in the debtors and discounts all their IOUs. They have 20-30% shaved off their bills.

There are many implications here, but we don't have the time to go into them. Suffice to say, he was dishonest. Now his master checks the books and discovers what he has done, but he can't really do anything to the manager or the debtors other than fire the former. But he grudgingly commends the manager for his shrewdness. It's like one con artist praising another con artist for a better con.

Now, when Jesus says that " the people of this world are more shrewd in dealing with their own kind than are the people of the light," he is not praising them. He is saying that worldly people do so much to secure their future, but people of the light don't. And I see the truth of that all around me. We take eternity so casually. We expend so much time and energy securing things that don't last but hardly do anything to secure our future in the life beyond.

And then Jesus makes the statement that confuses many. He says, "I tell you, use worldly wealth to gain friends for yourselves, so that when it is gone, you will be welcomed into eternal dwellings." How do we gain friends in heaven by using wealth? In the context of the Parable of Lazarus and the Rich Man, which immediately follows this passage, these friends might be poor people around us. We should make friends with them!

Proverbs 19:17 says: "Whoever is kind to the poor lends to the LORD, and he will reward them for what they have done." Something to think about today.