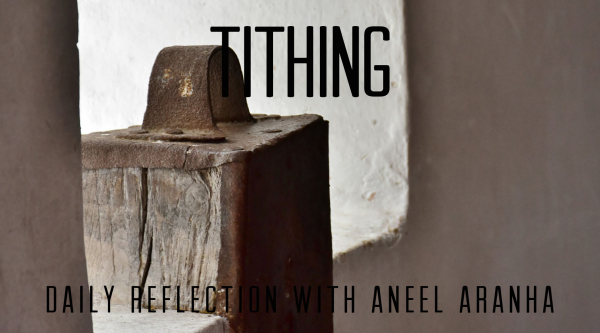 As he taught, Jesus said, “Watch out for the teachers of the law. They like to walk around in flowing robes and be greeted with respect in the marketplaces, and have the most important seats in the synagogues and the places of honor at banquets. They devour widows’ houses and for a show make lengthy prayers. These men will be punished most severely.” Jesus sat down opposite the place where the offerings were put and watched the crowd putting their money into the temple treasury. Many rich people threw in large amounts. But a poor widow came and put in two very small copper coins, worth only a few cents. Calling his disciples to him, Jesus said, “Truly I tell you, this poor widow has put more into the treasury than all the others. They all gave out of their wealth; but she, out of her poverty, put in everything—all she had to live on.”

Ok, guess what I am going to talk about today? Yep, tithing. I know that most people would agree that giving money, especially in tithes, is a worthwhile practice. However, it is rarely a priority, much less an urgent matter for most Christians. This attitude needs to change because by not being a source of blessing to the Church and its people, we often deny ourselves blessings as well.

This is what the prophet Malachi said: “Bring the whole tithe into the storehouse, that there may be food in my house. Test me in this,” says the LORD Almighty, “and see if I will not throw open the floodgates of heaven and pour out so much blessing that there will not be room enough to store it. I will prevent pests from devouring your crops, and the vines in your fields will not drop their fruit before it is ripe. Then all the nations will call you blessed, for yours will be a delightful land” (Malachi 3:10-12). You will find many other references below.

Some say that tithing is an Old Testament practice not prescribed by the Church, but that is simply not true. We find Jesus himself telling us to tithe. “Woe to you Pharisees, because you give God a tenth of your mint, rue and all other kinds of garden herbs, but you neglect justice and the love of God. You should have practiced the latter without leaving the former undone” (Luke 11:42). Note how he says they should have practiced justice and the love of God without stopping the practice of tithing.

And when we tithe — note I say when, not if — when we tithe, let us ensure that we have the right attitude. In our little passage today, both the Pharisee and the widow tithed, but Jesus wasn’t pleased with the Pharisees’ offering. Why? Because like almost everything the Pharisees did, they did it for the wrong reasons. They did it to draw attention to themselves and their “holiness” so that they would be praised and honored by people. Jesus is not impressed by public displays of piety. He says, “You wanna do that, fine, but know you have already received your reward on earth; don’t expect an additional reward in heaven” (see Matthew 6).

A reward in heaven is better than a reward on earth, don’t you think? Happy tithing.