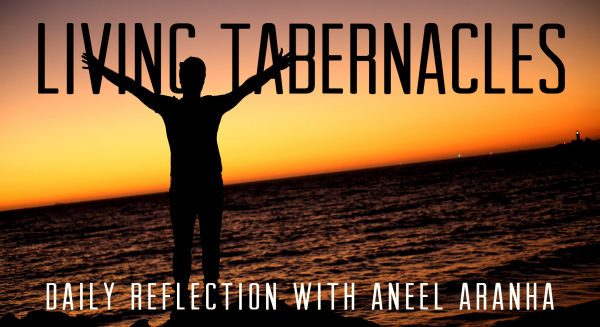 When it was almost time for the Jewish Passover, Jesus went up to Jerusalem. In the temple courts he found people selling cattle, sheep and doves, and others sitting at tables exchanging money. So he made a whip out of cords, and drove all from the temple courts, both sheep and cattle; he scattered the coins of the money changers and overturned their tables. To those who sold doves he said, “Get these out of here! Stop turning my Father’s house into a market!” His disciples remembered that it is written: “Zeal for your house will consume me.” The Jews then responded to him, “What sign can you show us to prove your authority to do all this?” Jesus answered them, “Destroy this temple, and I will raise it again in three days.” They replied, “It has taken forty-six years to build this temple, and you are going to raise it in three days?” But the temple he had spoken of was his body. After he was raised from the dead, his disciples recalled what he had said. Then they believed the scripture and the words that Jesus had spoken.

Jesus is in militant form as he enters the temple and proceeds to drive out all the merchandizers and the money changers along with the sheep and cattle, yelling at them: "Get these out of here! Stop turning my Father's house into a market!" If this were a scene in a movie, the audience might be tempted to cheer. And why not? A temple is holy ground and should be treated as such, right? Right?

Well, don't you know your body is a temple of the Holy Spirit? Your body is holy ground. This is what Paul said to the Corinthians. "Flee from sexual immorality," he urged. "All other sins a person commits are outside the body, but whoever sins sexually, sins against their own body. Do you not know that your bodies are temples of the Holy Spirit, who is in you, whom you have received from God? You are not your own; you were bought at a price. Therefore honor God with your bodies" (1 Corinthians 6:18-20).

He was warning Corinthians, who were leading pretty debauched lives despite having found Christ. They did not seem to have understood that salvation came at a price, and the price was every drop of Christ's blood. We seem to forget this, too, given how casually we treat our bodies. We also seem to forget that we don't belong to ourselves; we belong to Christ. He owns us.

This is why Paul says: "Therefore, I urge you, brothers and sisters, in view of God's mercy, to offer your bodies as a living sacrifice, holy and pleasing to God—this is your true and proper worship" (Romans 12:1). What does it mean to offer our bodies to God as a living sacrifice? In the olden day's animals were offered to God as a sacrifice. These animals had to be without spot or blemish. Our lives are to be without spot and blemish. And a life like this is authentic worship, a true sign that we honor God.

And when we recognize that our bodies are temples of the Spirit, we will recognize that other people's bodies are also temples of God's Spirit and be careful how we treat them. And that is a good thing because as Paul warns: "If anyone destroys God's temple, God will destroy that person; for God's temple is sacred, and you together are that temple" (1 Corinthians 3:17).

So, let's try to keep those temples holy, shall we?