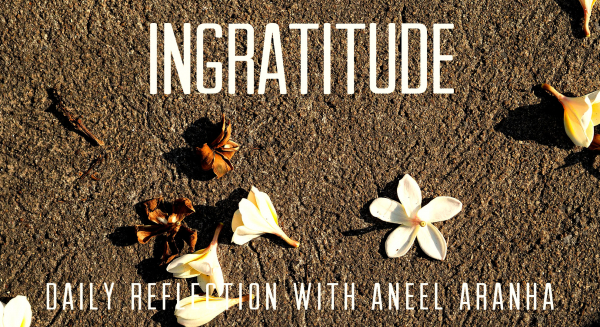 Now on his way to Jerusalem, Jesus traveled along the border between Samaria and Galilee. As he was going into a village, ten men who had leprosy met him. They stood at a distance and called out in a loud voice, “Jesus, Master, have pity on us!” When he saw them, he said, “Go, show yourselves to the priests.” And as they went, they were cleansed. One of them, when he saw he was healed, came back, praising God in a loud voice. He threw himself at Jesus’ feet and thanked him—and he was a Samaritan. Jesus asked, “Were not all ten cleansed? Where are the other nine? Has no one returned to give praise to God except this foreigner?” Then he said to him, “Rise and go; your faith has made you well.”

I have titled this reflection ‘Ingratitude’ rather than ‘Gratitude’ because it is a story about ungratefulness rather than gratefulness. Jesus heals ten lepers, but only one of them turns back to thank him for the healing. And Jesus asks, “Were not ten made clean? But where are the other nine?” Don’t you wonder too? Didn’t they have reason to be grateful? This was not a minor miracle; it was a big one, yet they seemed to take it for granted. And therein lies the problem.

If we see how we behave outside church, it isn’t very different. We don’t thank people because we have never really gotten into the habit of thanking them. Please note that I am not talking about the automatic “thank you” we say when somebody does something for us like opening a door or giving us a gift. I am talking about going out of our way like the Samaritan in our story to thank somebody who has rendered us a service.

This little story is also a salvation story. Scripture makes a point of noting that the man who returned was a Samaritan. He appreciated grace for what it was. The nine other lepers, exemplifying the Jews, didn’t realize the tremendous gift they had received. Ditto for us. Unless we understand what a great gift salvation is, we won’t respond with gratitude. And gratitude is an integral part of faith because it helps in making us spiritually complete. When we are grateful for salvation, we reorient our hearts towards God.

So, let us be grateful. Especially for little things. Because one day, we will look back and realize they were very big things.