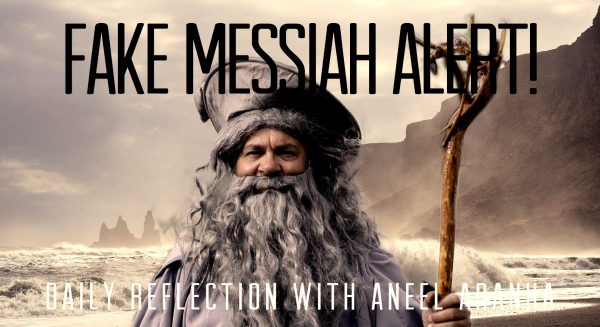 Once, on being asked by the Pharisees when the kingdom of God would come, Jesus replied, “The coming of the kingdom of God is not something that can be observed, nor will people say, ‘Here it is,’ or ‘There it is,’ because the kingdom of God is in your midst.” Then he said to his disciples, “The time is coming when you will long to see one of the days of the Son of Man, but you will not see it. People will tell you, ‘There he is!’ or ‘Here he is!’ Do not go running off after them. For the Son of Man in his day will be like the lightning, which flashes and lights up the sky from one end to the other. But first he must suffer many things and be rejected by this generation.

Then we have Korean-born Sun Myung Moon. In 1954, he formally founded the Holy Spirit Association for the Unification of World Christianity in Seoul. He quickly drew young acolytes who helped to build the foundations of church-affiliated business and cultural organizations. But although he preached a conservative, family-oriented value system, he had his interpretation of the Bible. And he declared himself a Messiah.

Then there is David Koresh, an American who was a member and later a leader of the Branch Davidians. This group splintered off from the Davidian Seventh-day Adventist Church. He competed for dominance with another leader named George Roden until Roden was jailed for murdering another rival. Koresh then claimed to be the group's final prophet.

Every generation seems to have somebody who claims to be a prophet, or messiah, or God. I am not surprised. Every age also has people who think they are Napoleon, or Caesar, or Gandhi. They end up where they belong—in a psych ward. What surprises me is: 1) why these people aren't in a mental hospital; and 2) how they find people to buy into their madness. What is wrong with people?

So, let's pray for his coming. And let us be at peace until he does, ensuring that we are as close to him as close can be.