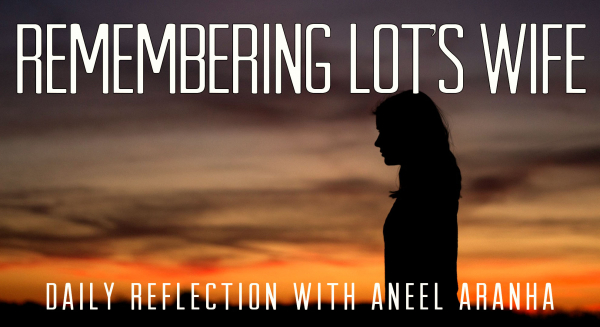 Jesus said: “Just as it was in the days of Noah, so also will it be in the days of the Son of Man. People were eating, drinking, marrying and being given in marriage up to the day Noah entered the ark. Then the flood came and destroyed them all. t was the same in the days of Lot. People were eating and drinking, buying and selling, planting and building. But the day Lot left Sodom, fire and sulfur rained down from heaven and destroyed them all. It will be just like this on the day the Son of Man is revealed. On that day no one who is on the housetop, with possessions inside, should go down to get them. Likewise, no one in the field should go back for anything. Remember Lot’s wife! Whoever tries to keep their life will lose it, and whoever loses their life will preserve it. I tell you, on that night two people will be in one bed; one will be taken and the other left. Two women will be grinding grain together; one will be taken and the other left.” “Where, Lord?” they asked. He replied, “Where there is a dead body, there the vultures will gather.”

I'm pretty sure you know this story but let me tell it anyway. There was an Old Testament town called Sodom, where the people were exceedingly wicked. A man named Lot lived in this town with his family. Lot, as you probably know, was Abraham's nephew. One day, two angels arrived in Sodom, and Lot invited them to spend the night at his home. Hearing about the angels, the men of the city gathered around Lot's house, demanding that Lot turn the angels over to them for their pleasure. Lot refused.

When the men tried to break their way into the house, the angels struck them blind so that they couldn't find the door. As dawn broke, the angels urged Lot to get his family and escape the havoc that God would bring upon the city. The angels instructed: "Flee for your lives! Don't look back, and don't stop anywhere!" (Genesis 19:17). But while fleeing, "Lot's wife looked back, and she became a pillar of salt" (Genesis 19:26).

There are two lessons that we can learn from Lot's wife. One: Don't look back. When we are born again in Christ, we have new life. As Paul says, "if anyone is in Christ, the new creation has come: The old has gone, the new is here!" (2 Corinthians 5:17). Returning to our old lives is like "a dog returning to its vomit," and, "a pig that is washed returning to wallowing in the mud" (see 2 Peter 2:22).

Two: Take God's warnings seriously. God has warned us so many times about so many things. For example, he has warned us of the consequences of defiling our bodies, which are temples of the Holy Spirit (see 1 Corinthians 6:18-20). He warns us of even graver consequences if we defile other people's bodies (see 1 Corinthians 3:16-17). But, like the people of Noah's time, and like Lot's wife, we treat these warnings very casually. One day we will pay the price.

If that event takes place right now, are we ready?