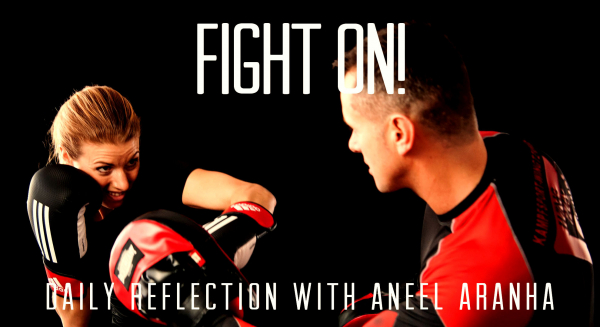 Then Jesus told his disciples a parable to show them that they should always pray and not give up. He said: “In a certain town there was a judge who neither feared God nor cared what people thought. And there was a widow in that town who kept coming to him with the plea, ‘Grant me justice against my adversary.’ “For some time he refused. But finally he said to himself, ‘Even though I don’t fear God or care what people think, yet because this widow keeps bothering me, I will see that she gets justice, so that she won’t eventually come and attack me!’” And the Lord said, “Listen to what the unjust judge says. And will not God bring about justice for his chosen ones, who cry out to him day and night? Will he keep putting them off? I tell you, he will see that they get justice, and quickly. However, when the Son of Man comes, will he find faith on the earth?”

There are two characters in this story. One is “a judge who neither feared God nor cared what people thought.” He is essentially a man who is a law unto himself. He has no regard for God and even less for people. I am sure we have met people like this. They claim to be “self-made” and take great pride in their intellect, personality, and abilities. They are self-centered human beings, concerned only with their opinions, their comfort, and their needs. Jesus later calls the judge “unjust,” suggesting that he was also corrupt.

The second character is “a widow who kept coming to (the judge) and saying, ‘Grant me justice against my adversary.’” Scripture speaks about widows often. Theirs was not an easy life. They had no legal right to the husband’s property after his death, and if she had no children, the estate automatically went to her husband’s family! Even if the widow had children, there was a good chance her in-laws would challenge the inheritance resulting in a legal battle, which might be what this story is about.

So, the widow is in court, trying to defend what she believes is hers by right. And it is. She knows the judge sells justice to the highest bidder. She can’t buy him because she can’t afford him, but even if she could, she wouldn’t because she had values that she believed in and stood for. She has no chance of winning. But she is a fighter, and if she goes down, she will go down fighting. So she visits court every time this particular judge is on the bench, and she sits there quietly, appealing to a higher judge that this one sees reason.

She does what she can to make her case known to the public, but for the most part, everybody ignores her. She is not their problem, and they don’t want to be involved. But that doesn’t bother the widow either. She continues to make a stand. And then, one day, the judge delivers a verdict in her favor. What happened? The judge got afraid. He would see this woman every time he was presiding, and he would see her eyes fixed on him, and he would get rattled.

He would see her standing with a placard outside his court every time he entered and left. It is one thing being a corrupt person; it is another having everybody know that you are corrupt. This little widow, whom the judge thought powerless and could be bullied, is exposing him for what he really is. And the judge decides that whatever his opponent is paying him is not worth it and grants the widow what she wants.

And then Jesus explains the story to his listeners. He substitutes God for the judge and his “chosen ones” for the widow. I can hear the protest. “But God isn’t unjust!” you say. Indeed, he isn’t, and that is the point of the story. If an unjust judge could ensure that a woman he held in low esteem was not left without assistance, then how much more would a just judge ensure that those who cried to him for help found relief.

So, if you are fighting for justice, do not give in to discouragement, disillusionment, or disappointment. Fight. God is on your side.