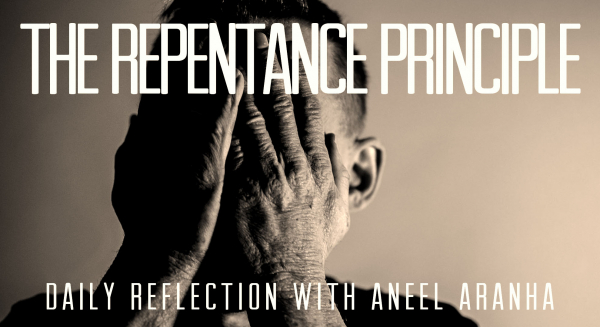 Jesus entered Jericho and was passing through. A man was there by the name of Zacchaeus; he was a chief tax collector and was wealthy. He wanted to see who Jesus was, but because he was short he could not see over the crowd. So he ran ahead and climbed a sycamore-fig tree to see him, since Jesus was coming that way. When Jesus reached the spot, he looked up and said to him, “Zacchaeus, come down immediately. I must stay at your house today.” So he came down at once and welcomed him gladly. All the people saw this and began to mutter, “He has gone to be the guest of a sinner.” But Zacchaeus stood up and said to the Lord, “Look, Lord! Here and now I give half of my possessions to the poor, and if I have cheated anybody out of anything, I will pay back four times the amount.” Jesus said to him, “Today salvation has come to this house, because this man, too, is a son of Abraham. For the Son of Man came to seek and to save the lost.”

I want to share a fundamental principle about the correlation between God’s love and our own repentance that I have discovered in my faith journey. The principle is this: God does not love us because we repent; we repent because God loves us. We must understand this because if we don’t, we will likely find ourselves conflicted and fearful.

Consider the Parable of the Prodigal Son, who found himself in a pigsty envying the food the pigs were eating. “When he came to his senses, he said, ‘How many of my father’s hired servants have food to spare, and here I am starving to death! I will set out and go back to my father and say to him: Father, I have sinned against heaven and against you” (Luke 15:17-18).

We can see he is acknowledging his sin but is he repentant? Probably not. He is undoubtedly sorry about many things—that he squandered his fortune, that he lost his friends, that he had sunk to such a terrible state—but I don’t think he is really sorry that he has hurt his father. When does he feel this sorrow? When he returns home, and instead of being treated with the harshness he undoubtedly believes he deserves, he is treated like a returning war hero. That’s when repentance enters his heart.

I, of course, speak from experience. It is in moments of failure that I have experienced the love of God, in the mercy and forgiveness that he extends so graciously. This can be overwhelming, and if often is, resulting in a change of heart. That’s what the Greek word “metanoia” means, which translates in English as repentance.

The root word of graciousness is grace, which is a gift. In our story today, Zacchaeus experiences this graciousness. People are shocked when Jesus invites himself to Zacchaeus’ house. As a chief tax collector, he would have extorted a lot of money from people, and they would have Jesus to give him the rough end of the stick. However, what Zacchaeus received was mercy. And he changed.

Do you want to change? Experience God’s forgiving love. But for that, we need to accept we are sinners in need of forgiveness.