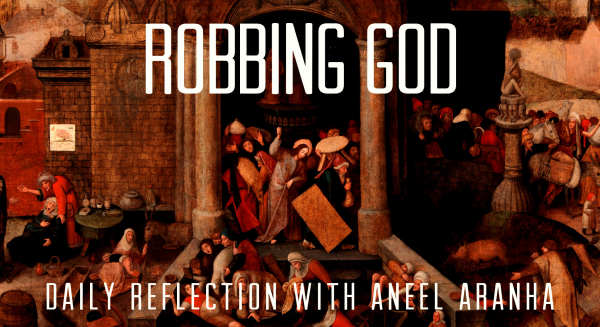 When Jesus entered the temple courts, he began to drive out those who were selling. “It is written,” he said to them, “‘My house will be a house of prayer’; but you have made it ‘a den of robbers.’” Every day he was teaching at the temple. But the chief priests, the teachers of the law and the leaders among the people were trying to kill him. Yet they could not find any way to do it, because all the people hung on his words.

On first reading, this might seem like Jesus is targeting commercial enterprise done in the name of religion, but it is more than that. Consider what Jesus said: My house shall be a house of prayer, but you have made it a den of thieves. These are two statements from the Old Testament.

The first statement about the temple being a house of prayer is from Isaiah 56:7, where God promises to bring all those who seek him to salvation. "These I will bring to my holy mountain and give them joy in my house of prayer. Their burnt offerings and sacrifices will be accepted on my altar; for my house will be called a house of prayer for all nations."

The second statement about turning the house of prayer into a den of robbers is from Jeremiah 7:11, where God asks: "Has this house, which bears my Name, become a den of robbers to you? But I have been watching! declares the LORD." And if we read the rest of what the prophet writes, we see that there are a whole lot of things that turned the temple into a den of robbers, notably the errant deeds of those who ran them and the deceptive nature of those who entered them.

Many churches today, and I speak universally, have lost a sense of prayer. To attract numbers—and money—they have turned churches into entertainment houses, often televised to boost numbers further. Even in traditional churches that don't encourage shoddy theater, worship seems more about the "act of worship" rather than communing with God. And pastors seem to have become more like administrators than shepherds.

How do we rectify this? Jesus said, "God is spirit, and his worshipers must worship in the Spirit and in truth" (John 4:24). We need to restore the temple's sanctity by ceasing all activity that detracts from it and preaching the truth as God intends it preached. This means without sugar-coating, diluting, or otherwise corrupting God's messages. Doing this robs God of what belongs to him. Many may not like you for preaching the truth, but don't let that stop you.