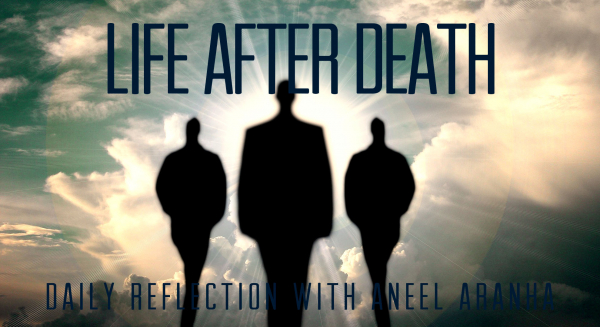 Some of the Sadducees, who say there is no resurrection, came to Jesus with a question. “Teacher,” they said, “Moses wrote for us that if a man’s brother dies and leaves a wife but no children, the man must marry the widow and raise up offspring for his brother. Now there were seven brothers. The first one married a woman and died childless. The second and then the third married her, and in the same way the seven died, leaving no children. Finally, the woman died too. Now then, at the resurrection whose wife will she be, since the seven were married to her?” Jesus replied, “The people of this age marry and are given in marriage. But those who are considered worthy of taking part in the age to come and in the resurrection from the dead will neither marry nor be given in marriage, and they can no longer die; for they are like the angels. They are God’s children, since they are children of the resurrection. But in the account of the burning bush, even Moses showed that the dead rise, for he calls the Lord ‘the God of Abraham, and the God of Isaac, and the God of Jacob.’ He is not the God of the dead, but of the living, for to him all are alive.” Some of the teachers of the law responded, “Well said, teacher!” And no one dared to ask him any more questions.

Have you watched the movie “Seven Brides for Seven Brothers”? If you ever want a change from the ultra-violent movies being made these days, you might want to see this immensely entertaining musical made in the 50s. I was reminded of this movie when I read this passage today, where the Sadducees ask Jesus a hypothetical question about what happens to a bride if she happens to be married to seven brothers, all of who die. In the resurrection, whose wife will the woman be?

I doubt this was an original question. They had probably asked it before, trying to “prove” that there was no resurrection. It had its basis in Deuteronomy 25:5-6, which said that if brothers were living together and one of them died without a son, his widow must not marry outside the family. She had to marry her husband’s brother. This was to perpetuate the lineage of each tribe, which takes special significance when you realize that Jesus had to be born from one of them.

Anyway, Jesus’ answer throws some light on a question that we might have about what happens to the relationships we have on earth when we get to heaven. Do our spouses remain our spouses? Do our children remain our children? No, they don’t. The universe as we know it will cease to exist, replaced by another universe. There won’t be death—or marriage—in this universe because our bodies will be different. They will be glorified bodies.

What kind of bodies will these be? I can’t even begin to imagine. People asked Paul the same thing, and he said: “But someone will ask, “How are the dead raised? With what kind of body will they come?” How foolish! What you sow does not come to life unless it dies. When you sow, you do not plant the body that will be, but just a seed, perhaps of wheat or something else (1 Corinthians 15:35-37).

Will we recognize each other? Given that both Elijah and Moses were recognizable by Peter, James, and John on the Mount of Transfiguration (see Matthew 17:1-13), we should be able to recognize one another, although it might take some doing. Consider how long it took some of his disciples to recognize Jesus after his resurrection.

So, if you do recognize me when you get up there, please say hello. And while you are still here on earth, you might want to watch “Seven Brides for Seven Brothers.”