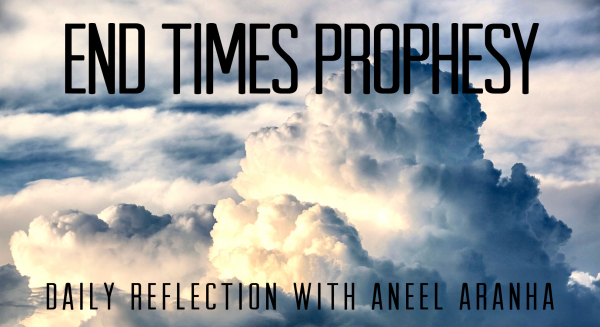 Jesus said: “When you see Jerusalem being surrounded by armies, you will know that its desolation is near. Then let those who are in Judea flee to the mountains, let those in the city get out, and let those in the country not enter the city. For this is the time of punishment in fulfillment of all that has been written. How dreadful it will be in those days for pregnant women and nursing mothers! There will be great distress in the land and wrath against this people. They will fall by the sword and will be taken as prisoners to all the nations. Jerusalem will be trampled on by the Gentiles until the times of the Gentiles are fulfilled. There will be signs in the sun, moon and stars. On the earth, nations will be in anguish and perplexity at the roaring and tossing of the sea. People will faint from terror, apprehensive of what is coming on the world, for the heavenly bodies will be shaken. At that time they will see the Son of Man coming in a cloud with power and great glory. When these things begin to take place, stand up and lift up your heads, because your redemption is drawing near.”

It is always fascinating to see a prophecy made in scripture fulfilled. The greatest fulfillment of prophecy, of course, is the coming of the Messiah, but Jesus himself prophesied many things. Here in this passage, he says: "When you see Jerusalem surrounded by armies, then know that its desolation has come near. Then those in Judea must flee to the mountains, and those inside the city must leave it, and those out in the country must not enter it."

In a recent reflection, I spoke of how over a million residents of Jerusalem died in one of the most brutal sieges in human history. What I didn't say was how many Christians survived the massacre. Eusebius, a historian, wrote: "The people of the church in Jerusalem had been commanded by a revelation given to approved men there before the war, to leave the city and to dwell in a certain town of Perea called Pella."

The people who took Jesus' prophecy seriously were saved because they prepared to leave the city. There is another prophecy contained in this passage, this one a little strange. Jesus says, "Jerusalem will be trampled on by the Gentiles until the times of the Gentiles are fulfilled." What could this mean? The "Gentiles" are non-Jewish people, and for centuries they moved through Jerusalem.

However, in 1949, the modern State of Israel took control of Jerusalem's western and southern portions. Jordan controlled the eastern portion and the Old City, but during the 1967 war, Israel took possession of the entire city. However, the temple mount is still under Muslim control. The Dome of the Rock, one of the holiest places of Islam, is situated there.

So, does that have to come under Jewish control for the prophecy to be fulfilled? I don't pretend to know, but I do know that like the Christians who took Jesus' warning seriously and were spared, we need to take heed of the things that Jesus says seriously too. These are not just matters of life and death as we understand life and death; these are matters of everlasting rest or eternal condemnation.

It won't be long before the Son of Many comes with power and great glory. Let us be able to stand up and raise our heads.