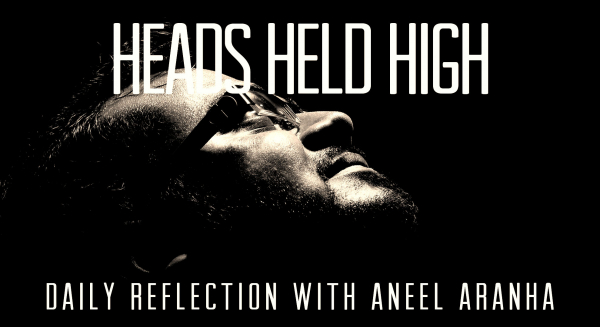 Jesus said: “There will be signs in the sun, moon and stars. On the earth, nations will be in anguish and perplexity at the roaring and tossing of the sea. People will faint from terror, apprehensive of what is coming on the world, for the heavenly bodies will be shaken. At that time they will see the Son of Man coming in a cloud with power and great glory. When these things begin to take place, stand up and lift up your heads, because your redemption is drawing near. Be careful, or your hearts will be weighed down with carousing, drunkenness and the anxieties of life, and that day will close on you suddenly like a trap. For it will come on all those who live on the face of the whole earth. Be always on the watch, and pray that you may be able to escape all that is about to happen, and that you may be able to stand before the Son of Man.”

Today we begin the season of Advent. The word derives from the Latin ‘adventus’, a translation of the Greek word ‘parousia,’ commonly used to refer to the Second Coming of Christ. Advent anticipates the coming of Christ from three different perspectives: in the flesh in Bethlehem (that’s Christmas Day), in our hearts daily, and in glory at the end of time.

The passage we are reflecting upon today begins with an apocalyptic vision with ‘the Son of Man coming in a cloud.’ A bright cloud is the symbolical seat of the Divine presence (see Exodus 29:42,43; 1 Kings 8:10; 2 Chronicles 5:14; Ezekiel 43:4 ), and was called the Shechinah. Jesus tells us to be alert because he could reappear at any moment, but unlike those who have reason to be afraid, the true believers would be able to hold their heads up high.

Who is the true believer? I suppose there are several ways to answer this question, but I found an excellent indicator by answering the question Jesus asked his apostles: “Who do you say I am?” Last Sunday, we celebrated the feast of Christ the King, and if our answer to the question was: “You are king,” then we need to examine how obedient we are to our king.

If we answered, as Peter did, “You are the Messiah, the Son of the living God,” (Matthew 16:16), then that ups the ante. You are acknowledging that Jesus is the savior who rescued you from eternal damnation. Not only will you spend the rest of your life wanting to know this person who laid down his life for you so that you could live, but you would also engage in bringing others to the salvation that you have received.

I honestly don’t think that giving Jesus an hour on Sunday and neglecting him for the rest of the week while engaging in the things he warns us about—dissipation, drunkenness, and despair—cuts it. So, as we begin this season of Advent, let us examine our relationship with Jesus. He asked Peter three times: “Do you love me?” If he asks you that three times, will you be able to answer “Yes”?

Jesus is coming back. Let us have our heads held high when he does.