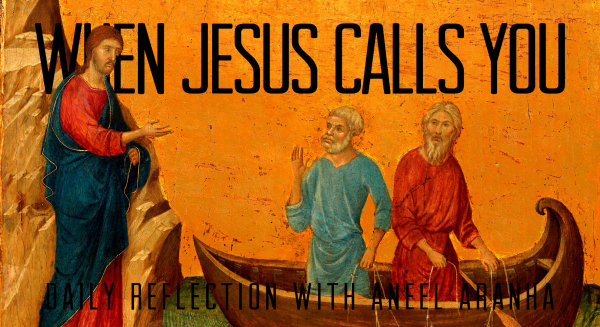 As Jesus was walking beside the Sea of Galilee, he saw two brothers, Simon called Peter and his brother Andrew. They were casting a net into the lake, for they were fishermen. “Come, follow me,” Jesus said, “and I will send you out to fish for people.” At once they left their nets and followed him. Going on from there, he saw two other brothers, James son of Zebedee and his brother John. They were in a boat with their father Zebedee, preparing their nets. Jesus called them, and immediately they left the boat and their father and followed him.

It’s been a while since I started a reflection with a question, so let me ask you one now. Did you celebrate the Feast of Christ the King last Sunday? Another question that naturally follows this is: Is he YOUR king of the kingdom you belong to, or is he just a king of some kingdom that has no relevance to you? And another question that follows this—I bet you know what’s coming—if he is your king, then should you not follow him?

You might say that you do, but do you really? In our passage today, we find him calling four fishermen—Peter, Andrew, James, and John—to follow him. “Follow me, and I will make you fish for people.” And they immediately left their nets and followed him. It is incredible because, at the time, they didn’t know he was king of anything. Yet, they heard his call and responded. They became his first apostles.

Now, there are two ways of following Jesus. One is to literally leave everything and follow Jesus as an apostle. Priests and pastors are excellent examples of people who have heard this calling. But there are laypeople too. I am one of them. I heard the call twenty years ago, and it confused me because I was married with children. Everybody I spoke to told me that Jesus wouldn’t have given me a family if he wanted to leave everything, but I looked at these guys in this passage, and some of them were married.

So that argument didn’t have any basis, at least scripturally. However, there were responsibilities I had. How was I to fulfill them? I think God did some talking to my wife because she told me to go ahead and do what God wanted—I had her support. Today this ministry reaches out to millions of people around the world. What would have happened if I hadn’t said “Yes”? God’s plan wouldn’t have stopped, he simply would have found somebody else, but I would have missed out on so much.

The second way of following Jesus is like a disciple. This does not entail dumping everything and going behind him. But it STILL entails leaving everything for Jesus. These “things” are of the world, and we need to leave them because we are not of the world. We are citizens of heaven (see Philippians 3:20). Think of it like this. If I am a citizen of Australia and happen to visit Peru for a short while, I will not invest a fortune in setting up a home in Peru, will I? I will try to ensure that my permanent residence in Australia is grand.

Similarly, our home is heaven. And Jesus is calling us to follow him there. Do not prevaricate. Like the fishermen, let our response be firm. And immediate.