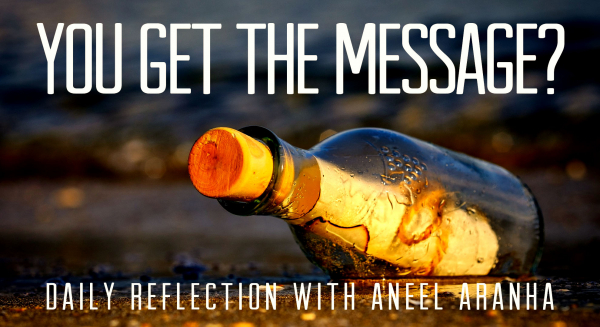 “Woe to you, Chorazin! Woe to you, Bethsaida! For if the miracles that were performed in you had been performed in Tyre and Sidon, they would have repented long ago, sitting in sackcloth and ashes. But it will be more bearable for Tyre and Sidon at the judgment than for you. And you, Capernaum, will you be lifted to the heavens? No, you will go down to Hades. “Whoever listens to you listens to me; whoever rejects you rejects me; but whoever rejects me rejects him who sent me.”

I don’t know why, but most of the pictures we see of Jesus depict him with this dreamy, placid look on his face, as though there is nothing that happens that can disturb his tranquility. And while I have no doubt in my mind that he had a peacefulness about him that transcended understanding, I also know that there were moments when he blew his top and you just have to look at his outburst against the scribes and pharisees to see that.

Why did he get so mad at these people? Because of their obtuseness. He has been working miracles in their midst, unlike any they have ever seen before. He has healed the sick, driven out demons, even brought the dead back to life—all signs that prove his divine origin—and they just don’t get it. If they don’t get the signs, they definitely won’t get the message. And if they don’t get the message, they won’t respond as they should: with repentance and conversion!

Do WE get the message? Fr. Alfonse Nazzaro, a very wise priest from Texas, told the story of an army recruit who was undergoing training. The Army instructor made it very clear to all the young recruits. “Men, listen up! Jumping out of a plane is very serious business. Pay close attention at all times. Follow instructions carefully. If you don’t, you could pay for it with your life.” As soon as he had finished these words, the men saw a plane flying directly above them.

As the instructor continued to speak to them, the recruits were distracted at what they saw. Ten men had jumped from the plane. As they were falling from the sky, one man’s parachute failed to open. The recruits could not believe what they were seeing. They watched in horror as the soldier hit the ground at over 100 mph. They witnessed blood and guts splatter and scatter all over the place. It turned out to be just a dummy. But it was a lesson none of the recruits ever forgot.

What Jesus did in today’s passage, as he scolded his listeners, was something similar to this demonstration. He was trying to shock his listeners into paying attention to something really important that he was saying to them. If they didn’t repent and convert, their fate would be worse than what happened in Tyre and Sidon, cities that were painfully destroyed in the past.