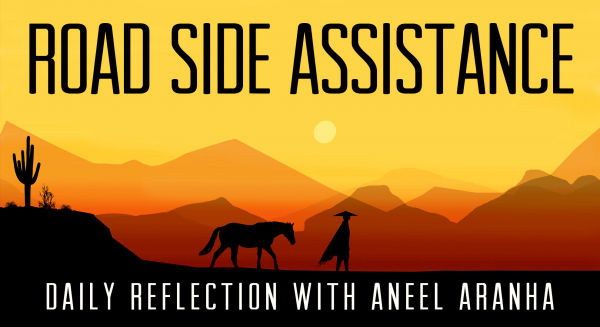 On one occasion an expert in the law stood up to test Jesus. “Teacher,” he asked, “what must I do to inherit eternal life?” “What is written in the Law?” he replied. “How do you read it?” He answered, “‘Love the Lord your God with all your heart and with all your soul and with all your strength and with all your mind’; and, ‘Love your neighbor as yourself.’” “You have answered correctly,” Jesus replied. “Do this and you will live.” But he wanted to justify himself, so he asked Jesus, “And who is my neighbor?” In reply Jesus said: “A man was going down from Jerusalem to Jericho, when he was attacked by robbers. They stripped him of his clothes, beat him and went away, leaving him half dead. A priest happened to be going down the same road, and when he saw the man, he passed by on the other side. So too, a Levite, when he came to the place and saw him, passed by on the other side. But a Samaritan, as he traveled, came where the man was; and when he saw him, he took pity on him. He went to him and bandaged his wounds, pouring on oil and wine. Then he put the man on his own donkey, brought him to an inn and took care of him. The next day he took out two denarii and gave them to the innkeeper. ‘Look after him,’ he said, ‘and when I return, I will reimburse you for any extra expense you may have.’ “Which of these three do you think was a neighbor to the man who fell into the hands of robbers?” The expert in the law replied, “The one who had mercy on him.” Jesus told him, “Go and do likewise.”

This is an amazing story because at a given time and in a given situation, we are all the characters in this story! We are, firstly, the injured person on the road, left helpless and dying by the robber of our souls, who is Satan. Jesus is the Good Samaritan, who stops to nurse us back to life, depositing us at the inn, which is the Church, and entrusting us into the care of the innkeeper, who is the pastor or priest whose duty it is to take care of the injured, weak and helpless nursing them to health and wholeness.

Hopefully, the innkeeper does a good job because he is going to be called to account for what he did. The Good Samaritan that is Jesus says, “Take care of him; and when I come back, I will repay you whatever more you spend’ (v.35). There is an implicit threat here too that is often missed. Where there is a reward for a job well done, there is also punishment for a job that’s not, and if the innkeeper doesn’t look after the wounded person entrusted into his care, he will get just desserts. “When I come back,” says the Good Samaritan.

We don’t remain injured forever; we eventually recover and once we get to our feet again, we become the traveler on the road, encountering others who are injured and left for dying on a daily basis. Only if we truly understand that the person lying there dying was in the same position, we were not too long ago we run the risk of being the first two characters who walk down the road: the priest, who knows and teaches his faith, but doesn’t practice it; or the Levite, who knows and teaches all the rules, but doesn’t follow them.

If, however, we understand what Jesus has done for us, we can only look upon others in a similar situation with compassion and then we will become like the Good Samaritan, not letting the threat of danger getting in our way of helping others, instead of taking the traditional approach of “not getting involved” The Samaritan in the story was aware of the dangers of the road that he traveled. It was not called The Way of Blood for nothing.

He must have surely wondered if the robbers were still around, waiting for another victim, but he took the risk, nonetheless. Christians are asked to take risks. “No one has greater love than this, to lay down one’s life for one’s friends,” Jesus declares in John 15:13. Or one’s neighbors. He didn’t let business (or busyness) get in his way either. He obviously had places to go to, people to meet, things to do, but he had his priorities right. The life of a man was infinitely more valuable than anything he might have had on his plate.

So, who are you going to drop off at the inn today?