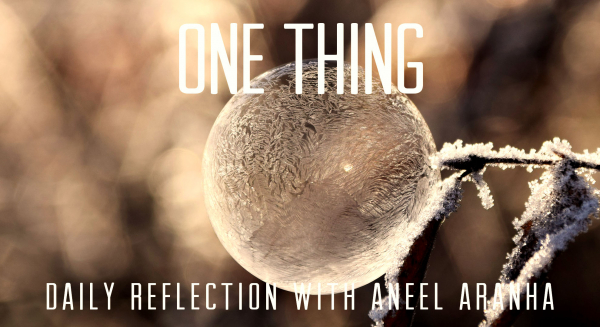 As Jesus and his disciples were on their way, he came to a village where a woman named Martha opened her home to him. She had a sister called Mary, who sat at the Lord’s feet listening to what he said. But Martha was distracted by all the preparations that had to be made. She came to him and asked, “Lord, don’t you care that my sister has left me to do the work by myself? Tell her to help me!” “Martha, Martha,” the Lord answered, “you are worried and upset about many things, but few things are needed—or indeed only one. Mary has chosen what is better, and it will not be taken away from her.”

There are sixteen times that the phrase “one thing” appears in Scripture. There are five instances that stand out. We have already looked at one. Let us look at the others. A rich young man once went to Jesus claiming to be righteous but was unwilling to give Jesus the one thing he asked for: himself. “And Jesus, looking at him, loved him, and said to him, “You lack one thing: go, sell all that you have and give to the poor, and you will have treasure in heaven; and come, follow me” (Mark 10:21).

Then there was David, who was entirely different. He was called “a man after God’s own heart.” This was because there was nothing he wanted more than God at every moment of his life. In one of his psalms, he said: “One thing have I asked of the Lord, that will I seek after: that I may dwell in the house of the Lord all the days of my life, to gaze upon the beauty of the Lord and to inquire in his temple” (Psalm 27:4).

Then there was man who was born blind. After he is healed by Jesus, he is interrogated by the religious leaders who accuse Jesus of being a sinner. Refusing to get intimidated by them, he tells his story, and it was a simple one. He answered, “I do not know whether he is a sinner. One thing I do know, that though I was blind, now I see.” (John 9:25).

And then there was Paul who walked the narrow path that leads to life. It wasn’t an easy path, as we all know too well, and he would fall as we did, but he never lost sight of the heavenly prize. He declared: “Brothers, I do not consider that I have made it my own. But one thing I do: forgetting what lies behind and straining forward to what lies ahead, I press on toward the goal for the prize of the upward call of God in Christ Jesus” (Philippians 3:13-14).

I wrote a song titled “One Thing” and if you would like to listen to it, you can do so here. It was sung by one of our worship leaders, Olivia Pereira. I hope it blessed you. https://youtu.be/HhZd4Ac7JOU