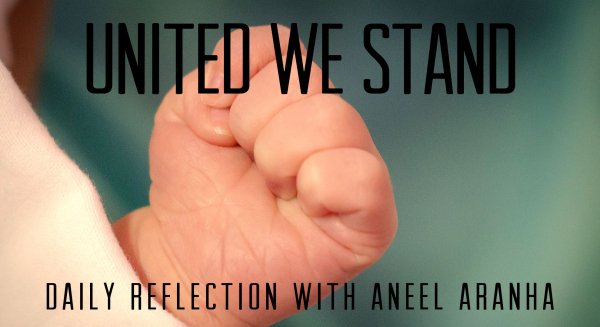 But some of them said, “By Beelzebul, the prince of demons, he is driving out demons.” Others tested him by asking for a sign from heaven. Jesus knew their thoughts and said to them: “Any kingdom divided against itself will be ruined, and a house divided against itself will fall. If Satan is divided against himself, how can his kingdom stand? I say this because you claim that I drive out demons by Beelzebul. Now if I drive out demons by Beelzebul, by whom do your followers drive them out? So then, they will be your judges. But if I drive out demons by the finger of God, then the kingdom of God has come upon you. When a strong man, fully armed, guards his own house, his possessions are safe. But when someone stronger attacks and overpowers him, he takes away the armor in which the man trusted and divides up his plunder. Whoever is not with me is against me, and whoever does not gather with me scatters. When an impure spirit comes out of a person, it goes through arid places seeking rest and does not find it. Then it says, ‘I will return to the house I left.’ When it arrives, it finds the house swept clean and put in order. Then it goes and takes seven other spirits more wicked than itself, and they go in and live there. And the final condition of that person is worse than the first.”

Beelzebul—or Beelzebub—is a name associated with the Canaanite god Baal and considered a major demon. In the Christian context, Beelzebul is another name for Satan. He is known in demonology as one of the seven princes of Hell and is described as a being capable of flying. Hence, he is known as the "Lord of the Flyers", or the "Lord of the Flies".

In today’s passage the crowd again criticizes Jesus for driving a demon out of a man who was possessed, with some saying, “By the power of Beelzebul, the prince of demons, he drives out demons.” Jesus questions their logic. "Every kingdom divided against itself will be laid waste and house will fall against house. And if Satan is divided against himself, how will his kingdom stand?”

The British developed the divide-and-rule strategy into a fine art allowing the tiny nation to conquer half the world. But long before the British got there, Satan did. What’s the antitode? Unity. Let me give you a couple of Scriptural quotes. Jesus praying to the Father said, “(I pray) that they may be one as we are one — I in them and you in me—so that they may be brought to complete unity” (John 17:22-23).

Paul urged unity several times: “I appeal to you, brothers and sisters, in the name of our Lord Jesus Christ, that all of you agree with one another in what you say and that there be no divisions among you, but that you be perfectly united in mind and thought” (1 Corinthians 1:10). He also said: “Make every effort to keep the unity of the Spirit through the bond of peace” (Ephesians 4:3).

Let us stay united. Because divided we fall.