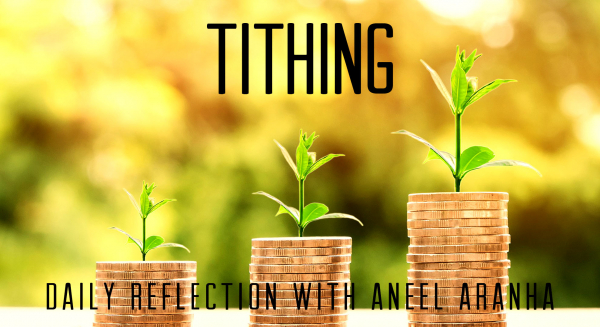 “Woe to you Pharisees, because you give God a tenth of your mint, rue and all other kinds of garden herbs, but you neglect justice and the love of God. You should have practiced the latter without leaving the former undone. Woe to you Pharisees, because you love the most important seats in the synagogues and respectful greetings in the marketplaces. Woe to you, because you are like unmarked graves, which people walk over without knowing it.” One of the experts in the law answered him, “Teacher, when you say these things, you insult us also.” Jesus replied, “And you experts in the law, woe to you, because you load people down with burdens they can hardly carry, and you yourselves will not lift one finger to help them.

A few years ago I got scolded by a lady. It isn’t easy to scold me as you can imagine but she did, going so far as calling me a coward because I never spoke to people about tithing. She said I was afraid about how they would react. Well, she was partially right. I was just starting my ministry at the time, and I didn’t want people thinking it was about money. But what she said next got me thinking. She said that in not telling people about tithing, I was denying them blessings. So, I investigated and realized she was right.

This is what Scripture says. “Bring the full tithe into the storehouse, so that there may be food in my house, and thus put me to the test, says the LORD of hosts; see if I will not open the windows of heaven for you and pour down for you an overflowing blessing. I will rebuke the locust for you, so that it will not destroy the produce of your soil; and your vine in the field shall not be barren, says the LORD of hosts’. (Malachi 3:10-11).

See what God is saying. He is saying, bring the tithe into the storehouse and I will open the floodgates of heaven, I will bless you in such a way that you will have no room to store it. You know this promise is unlike any other investment that we know of in this world. We invest our money in stocks and bonds, bank certificates but all of these have a cap in what they will give you in return for your investment. But God has no such cap, he says, you bring in the tenth and I will pour out so much blessing, you will have no room to hold it.

And not only does he promise to bless but he promises to preserve what you have. He says he will prevent pests from devouring the crops. What does this mean for us today? Do you have debts? Do you have court cases against you where you spend a lot of money on lawyers? Do you have illnesses that drain your finances? Do you have other problems where you spend so much money you have nothing left over at the end of the month? These are the pests that are stealing hard earned money.

Now there are those who say that tithing was an OT thing and has no place in the New Testament, but consider what Jesus says today. “Woe to you Pharisees, because you give God a tenth of your mint, rue and all other kinds of garden herbs, but you neglect justice and the love of God. You should have practiced the latter without leaving the former undone” (Luke 11:42) Notice the words: Without leaving the former undone.

There are others who say the Church doesn’t tell us to tithe. That’s not because the Church doesn’t want us to give money, but it doesn’t want to seal it at 10% which is what a tithe. It points to Paul’s advice to the Corinthians. “The one who sows sparingly will also reap sparingly, and the one who sows bountifully will also reap bountifully. Each of you must give as you have made up your mind, not reluctantly or under compulsion, for God loves a cheerful giver.”

So, do you want blessings or curse? You decide.