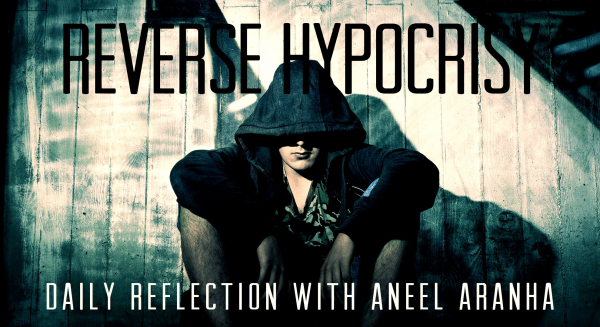 Meanwhile, when a crowd of many thousands had gathered, so that they were trampling on one another, Jesus began to speak first to his disciples, saying: “Be on your guard against the yeast of the Pharisees, which is hypocrisy. There is nothing concealed that will not be disclosed, or hidden that will not be made known. What you have said in the dark will be heard in the daylight, and what you have whispered in the ear in the inner rooms will be proclaimed from the roofs. “I tell you, my friends, do not be afraid of those who kill the body and after that can do no more. But I will show you whom you should fear: Fear him who, after your body has been killed, has authority to throw you into hell. Yes, I tell you, fear him. Are not five sparrows sold for two pennies? Yet not one of them is forgotten by God. Indeed, the very hairs of your head are all numbered. Don’t be afraid; you are worth more than many sparrows.

The famous movie star Robert Redford was walking one day through a hotel lobby. A woman saw him and followed him to the elevator. "Are you the real Robert Redford?" she asked him with great excitement. As the doors of the elevator closed, he replied, "Only when I am alone!"

We may not be movie stars, but I think we can all relate to this story. We have one face when we are alone and another one that we put on in public. This is perhaps understandable because, like Mark Twain said, “We're all like the moon, we have a dark side we don't want anyone to see.” If anybody did, they would probably run for cover. So, I suppose some degree of hypocrisy is required. Or is it?

Let us first understand hypocrisy. Hypocrisy is a deliberate pretense, with either a positive or a negative motivation. We are usually hypocritical to achieve men’s praise, but we can also be hypocritical or to avoid their persecution. The former were what the Pharisees were trying to do, putting on an act to gain the praises of people. The apostles, on the other hand, were doing the opposite, trying not to appear righteous to avoid persecution.

Jesus warns against both. He says there is nothing that is concealed that will not be revealed; whatever has been said in the darkness will be heard in the light. We might think that we can put on an act but to what purpose because if the intention was to conceal, it wasn’t going to work. It’s like being pregnant. You might hide it for a while but it will soon become obvious to everybody.

Then he warns about those who would try to conceal goodness because of fear. We see this on display everywhere when good people try to act bad so as to be socially acceptable or avoid scorn. Jesus asks us why we are afraid of those who can kill the body when there is somebody who can destroy both body and soul in hell that we should really be afraid of. So, let us not be hypocrites; just people who walk the talk because like Paul says “You are not in the flesh; you are in the Spirit, since the Spirit of God dwells in you” (Romans 8:9).

And the Spirit will help us walk the talk.