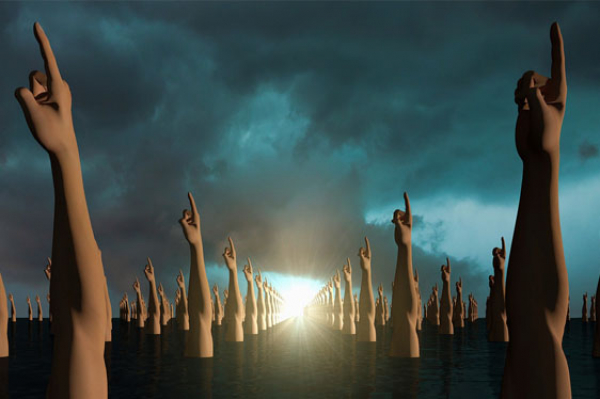 Then James and John, the sons of Zebedee, came to him. “Teacher,” they said, “we want you to do for us whatever we ask.” “What do you want me to do for you?” he asked. They replied, “Let one of us sit at your right and the other at your left in your glory.” “You don’t know what you are asking,” Jesus said. “Can you drink the cup I drink or be baptized with the baptism I am baptized with?” “We can,” they answered. Jesus said to them, “You will drink the cup I drink and be baptized with the baptism I am baptized with, but to sit at my right or left is not for me to grant. These places belong to those for whom they have been prepared.” When the ten heard about this, they became indignant with James and John. Jesus called them together and said, “You know that those who are regarded as rulers of the Gentiles lord it over them, and their high officials exercise authority over them. Not so with you. Instead, whoever wants to become great among you must be your servant, and whoever wants to be first must be slave of all. For even the Son of Man did not come to be served, but to serve, and to give his life as a ransom for many.”

Ever since we are little most of us are told we need to be first in everything—from studies to sports—and it is something that we carry forth through life. We want to be the richest, the smartest, the greatest. Healthy ambition, where we want to do the best we can, and succeed in what we do is not sinful; it becomes sinful when we believe it has to be at the expense of others.

When the others heard about this, they got mad. Why? Because they wanted to sit by Jesus’ side! Jesus had to pull them all up. He didn’t scold them for their ambition. He understood we all have a gene for ambition. He told them how to attain greatness. “Whoever wishes to become great among you,” he said, “must be your servant, and whoever wishes to be first among you must be slave of all”.

This might seem absurd but let us think about the logic of this for a moment. Imagine the two of us, you and me, want to become great. In the worldly way of things if I want to get ahead, I have to put you down, and there are a number of things, including slander, that can help me to do this. However, instead of putting you down, I raise you up. And you, too, instead of putting me down, build me up. What happens? Both of us rise, without us have to cut each other off at the knees.

And if God can serve man, we can surely serve each other.