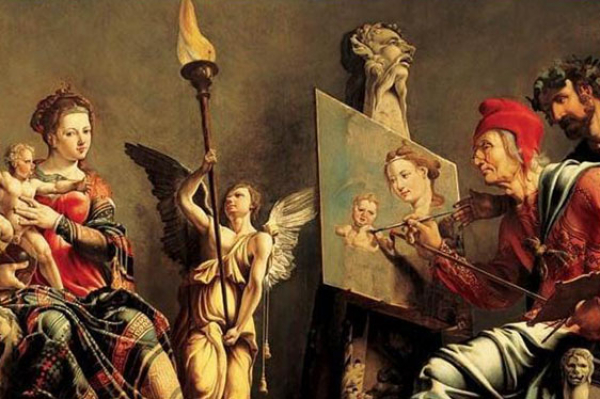 After this the Lord appointed seventy-two others and sent them two by two ahead of him to every town and place where he was about to go. He told them, “The harvest is plentiful, but the workers are few. Ask the Lord of the harvest, therefore, to send out workers into his harvest field. Go! I am sending you out like lambs among wolves. Do not take a purse or bag or sandals; and do not greet anyone on the road. “When you enter a house, first say, ‘Peace to this house.’ If someone who promotes peace is there, your peace will rest on them; if not, it will return to you. Stay there, eating and drinking whatever they give you, for the worker deserves his wages. Do not move around from house to house. “When you enter a town and are welcomed, eat what is offered to you. Heal the sick who are there and tell them, ‘The kingdom of God has come near to you.’

Luke is one of the authors of the four gospels. He is also the author of the Acts of the Apostles, which means that Luke contributed nearly a quarter of the text of the New Testament, more than any other author. Although he is not one of the twelve apostles of Jesus, he is generally believed to be one of the seventy apostles that Jesus sent out in pairs (see Luke 10:1-12).

He is mentioned a few times in the New Testament. In his letter to the Colossians Paul refers to him as a physician (see Colossians 4:14), and many believe that he was a Greek doctor who lived in the Greek city of Antioch in Ancient Syria. He is also mentioned in Paul’s letters to Philemon (Philemon 1:24) and to Timothy (2 Timothy 4:11), which suggests that he may have been Paul’s disciple. The fact that Paul says that “Luke alone is with me” in his final letter suggests that he was a particularly intimate and faithful companion.

Scholars also believe that the “famous brother” Paul speaks about in his second letter to the Corinthians is also Luke. Although he writes the gospel and the Acts of the Apostles, very little can be learned about his life from them. He does exclude himself from those who were eyewitnesses to Jesus’ ministry, but his repeated use of the word “we” in describing the Pauline missions, indicates that he was personally there at those times with access to Peter and Philip too.

Despite not being there with Jesus, he did, however, draw information from other eyewitnesses, one of who was most likely Matthew, another gospel author. Another eyewitness he likely interviewed was the Virgin Mary herself. Luke records the material in the infancy narrative in a way that implies Mary was the source of much or all the information contained in it (Luke 2:19, 51).

Luke died at age 84 in Boeotia, according to an early and widespread tradition. He is believed to have been a martyr, reportedly having been hanged from an olive tree. According to historians Luke's tomb was located in Thebes. His relics were transferred to Constantinople in the year 357. The Roman Catholic Church and other major denominations venerate him as Saint Luke the Evangelist and as a patron saint of artists, physicians, bachelors, surgeons, students and butchers.

A slightly different reflection today. I hope you enjoyed it. Do share these if they edify you.