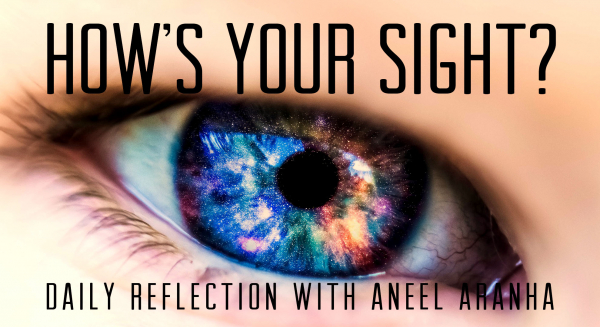 Then they came to Jericho. As Jesus and his disciples, together with a large crowd, were leaving the city, a blind man, Bartimaeus (which means “son of Timaeus”), was sitting by the roadside begging. When he heard that it was Jesus of Nazareth, he began to shout, “Jesus, Son of David, have mercy on me!” Many rebuked him and told him to be quiet, but he shouted all the more, “Son of David, have mercy on me!” Jesus stopped and said, “Call him.” So they called to the blind man, “Cheer up! On your feet! He’s calling you.” Throwing his cloak aside, he jumped to his feet and came to Jesus. “What do you want me to do for you?” Jesus asked him. The blind man said, “Rabbi, I want to see.” “Go,” said Jesus, “your faith has healed you.” Immediately he received his sight and followed Jesus along the road.

Let me tell you this story again, because it’s a good one. There was a blind man called Bartimaeus who used to sit by the roadside begging. One day, while he was sitting in his usual place, he heard the sound of commotion all around him and asked somebody nearby what was happening. He was told that Jesus of Nazareth was passing by. He had obviously heard of Jesus and knew who he was because he immediately cried out, “Jesus, son of David, have pity on me.”

A few people told him to keep quiet, but he wasn’t about to listen to anybody. He kept crying out to Jesus, who heard him. He stopped and told his apostles to call him. The apostles called the blind man, saying to him, “Take courage; get up, Jesus is calling you.” That’s three times the word “call” is being used in one passage. There’s a significance to this “calling”, but you figure that out. The blind man throws aside his cloak, springs up, and comes to Jesus in great excitement and anticipation.

And then Jesus asks him a strange question. “What do you want me to do for you?” As though Jesus didn’t know. If Jesus were to ask you this question today, what would you answer? It’s a serious question, so I want you to think about it for a moment. “What do you want Jesus to do for you today?” You see, the answer isn’t always what Jesus would like to hear. Let me explain. In the passage immediately preceding this one, James and John go to Jesus with a request: “Teacher,” they said, “we want you to do for us whatever we ask.”

Jesus asks them the same question he asks the beggar: “What do you want me to do for you?” (Mark 10:36). Do you know what they said? “Let one of us sit at your right and the other at your left in your glory” (Mark 10:37). I can only imagine Jesus staring at them long and hard, wondering when they would understand him. So here, when he is asking the beggar the question, he is doing it for the sake of the apostles, so they know the right answer.

The beggar said, “Master, I want to see.” And Jesus, instead of giving the logical response, “Receive your sight,” says, “Go your way, your faith has saved you.” In effect, Jesus was saying: I don’t need to give you your sight, because your faith has already given you sight. You can see what I see. And because you do, you will help others see as well.”

So, let me ask you again. “What do you want Jesus to do for you today?”