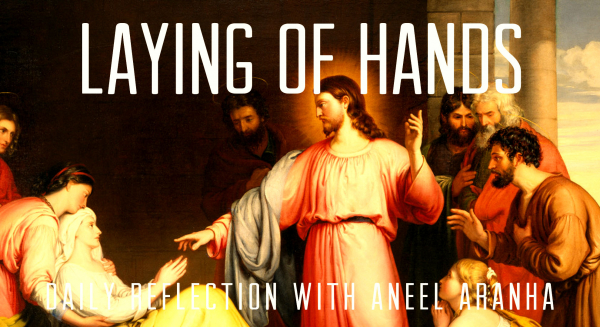 Jesus left the synagogue and went to the home of Simon. Now Simon’s mother-in-law was suffering from a high fever, and they asked Jesus to help her. So he bent over her and rebuked the fever, and it left her. She got up at once and began to wait on them. At sunset, the people brought to Jesus all who had various kinds of sickness, and laying his hands on each one, he healed them. Moreover, demons came out of many people, shouting, “You are the Son of God!” But he rebuked them and would not allow them to speak, because they knew he was the Messiah. At daybreak, Jesus went out to a solitary place. The people were looking for him and when they came to where he was, they tried to keep him from leaving them. But he said, “I must proclaim the good news of the kingdom of God to the other towns also, because that is why I was sent.” And he kept on preaching in the synagogues of Judea. Jesus has healed hundreds of people, some in very unique ways. These have included him sticking his fingers into a man’s ears to cure him of deafness (something that causes me much amusement), making a mud pack and placing it on the eyes of a man who can’t see, spitting on his fingers and touching the tongue of a man who is dumb. He has also, on occasion, merely spoken a word of healing as in the case of two paralytics, and a centurion’s servant who wasn’t even present at the scene.

In today’s narrative, we find him laying his hands on the sick and healing them. He didn’t do this for one or two, he did it for everyone, despite the fact there were many people who had come to Jesus for healing. He had just gone to Peter’s house and found Peter’s mother-in-law sick with a fever. He rebuked the fever and it left her. News traveled fast and before long the townspeople had gathered at Peter’s doorstep. Mark’s version says “the whole city was gathered around the door” (Mark 1:33).

What’s the significance of the laying of hands? In the Old Testament the general use in the laying of hands was negative. It meant to inflict harm or lay a curse on someone. There was also the ceremonial laying of hands, where the priest would place God’s righteous curse on an animal that was brought to him as a sacrifice for sins. However, there are two texts that anticipate how the laying of hands would come to be used in the New Covenant. These are Numbers 8:10 and Numbers 27:18, both showing acts of commission.

When Jesus enters the scene, it changes. We often find Jesus laying his hands on the sick to heal them (see Matthew 9:18; Mark 5:23; 6:5; 7:32; 8:22–25; and Luke 13:13). He also laid his hands on people, especially children, to bless them (see Matthew 19:13–15; Mark 10:16). Then, after Jesus ascended into heaven and the Holy Spirit had been poured out, we find numerous examples of the laying of hands. Much of this was still for healing, but we also find it was for the giving and receiving of the Holy Spirit. It is why the bishop lays his hands on the confirmands during confirmation.

Hands are also laid to commission people, and in Acts 6 we find an echo of Numbers 8:10 and 27:18. Seven disciples are chosen to help out in ministry, and these were presented “to the apostles, who prayed and laid their hands on them” (Acts 6:6). This is a practice that continues to be followed to this day, for instance in the commissioning of priests, as a means of grace. There is much more to be said on the subject, of course, but I thought you might enjoy a taste this morning as something a little different from my usual reflections.

May Jesus lay his hands upon us today.