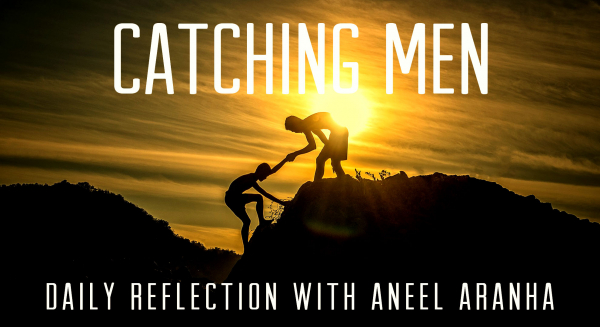 One day as Jesus was standing by the Lake of Gennesaret, the people were crowding around him and listening to the word of God. He saw at the water’s edge two boats, left there by the fishermen, who were washing their nets. He got into one of the boats, the one belonging to Simon, and asked him to put out a little from shore. Then he sat down and taught the people from the boat. When he had finished speaking, he said to Simon, “Put out into deep water, and let down the nets for a catch.” Simon answered, “Master, we’ve worked hard all night and haven’t caught anything. But because you say so, I will let down the nets.” When they had done so, they caught such a large number of fish that their nets began to break. So they signaled their partners in the other boat to come and help them, and they came and filled both boats so full that they began to sink. When Simon Peter saw this, he fell at Jesus’ knees and said, “Go away from me, Lord; I am a sinful man!” For he and all his companions were astonished at the catch of fish they had taken, and so were James and John, the sons of Zebedee, Simon’s partners. Then Jesus said to Simon, “Don’t be afraid; from now on you will fish for people.” So they pulled their boats up on shore, left everything and followed him. I use this story very often as my retreat starter. It is a very powerful passage with a lot of dramatic imagery and it really resonates with the audience. One particular part that captures their imagination is the response of an ordinary fisherman to Jesus after he has an encounter with him. He leaves his business of catching fish to catching men. How is he able to do this so spontaneously? I believe one of the main reasons is realizing that he met God and God didn’t vaporize him!

Let me explain. As we are probably aware, the wages of sin is death (Romans 6:23). A holy God cannot stand the sight of unholiness, and should a sinner dare to come into his presence he would strike the sinner down right where he stood. Even Moses wasn’t allowed to look upon his face. So here we have Peter, who meets Jesus who is the Son of God, only Peter doesn’t know it - yet. He has spent the entire night fishing but hasn’t caught anything. Then when Jesus tells him to go fishing again and catches so many fish his boats began to sink, he realizes that the man before him was divine.

He drops to his knees terrified that he is going to be burnt to a crisp. “Lord, stay away from me,” he says. “I am a sinful man.” And Jesus answers, “Hey, don’t be afraid, you’re safe.” And although he doesn’t say it here, we hear an echo of the words from John 3:16 and 17. “For I have not come to condemn the world, but to save it. For God so loves you, that he sent me, so that if you believe in me you will not perish but have eternal life.” Take a moment to imagine what Peter felt here. He was not struck dead, he was being given eternal life.

Now tell me, how could Peter go back to fishing after that? He understood that others would perish too and they needed to be saved like he was. So he was done catching fish; he was gonna catch men from now on. Do you ever wonder what my motivation is for doing things like these reflections? It isn’t, as my detractors might have you believe, for fame or fortune. It isn’t, as others might suggest, to convert people. I do this simply because having been saved, I cannot sit back and watch others perish. All I want to do is bring them to a knowledge of Christ; then let them decide what they want to do.

Now, if you are a Christian watching this, here is the million-dollar question for you: Are you saved? Are you sure? If you truly believe you are, then how can you just sit back and let an entire world perish?  I really need you to think about that for a long time until you come to the realization that if you really are saved, you will want everybody else saved too. And then you will do what you can to bring people to salvation.

And remember. The wages of sin might be death, but the gift of God is eternal life in Christ Jesus our Lord (Romans 6:23).